LG just announced a brand new smartphone, or better said a version of an existing phone, the LG Optimus LTE Tag. This model is based on the interaction with NFC stickers, that will active certain settings and options on it. An example is shown right in the image below, with a sticker attached to the car’s dashboard and probably activating something like GPS or Bluetooth for headset interaction. 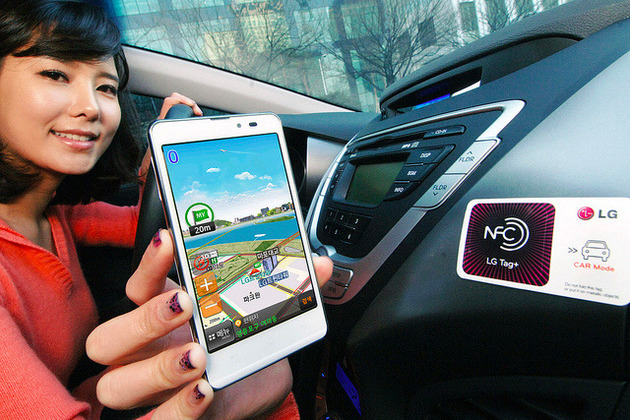 The LG Tag+ feature is the novelty here, allowing the smartphone to communicate with physical stickers through NFC. LG will offer all sorts of tags that can be placed anywhere, from office windows, to subway stations and whatnot. For example, you’ll be able to mute your device by interacting with the sticker while at the office, or activate the GPS on the handset once you come out of the subway and find a sticker like this. The LG Optimus LTE Tag comes with a 1.2GHz dual core CPU and it’s available in white.

This new model features a 4.3 inch display, a 5 megapixel camera and Android 2.3 Gingerbread. LG also promises an update to Android 4.0 Ice Cream Sandwich as soon as possible. For now all we have is Korean availability, but this model is probably going to reach the USA, Canada, Japan and South Korea, like the Optimus LTE before it.