It’s the third time LG and Prada work together on a handset, ever since 2007 when they first teamed up on the LG Prada Phone. Their latest work is the LG Prada Phone 3.0, that brings forth a surprisingly reasonable price tag, decent specs, great design and a strange black and white interface. Let’s what the fuss is about in our own GSMDome review of the product! 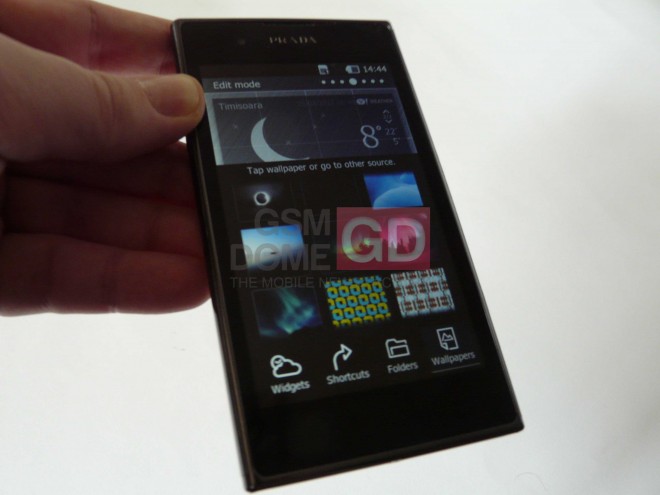 First things first, the LG Prada Phone 3.0 measures 8.5mm in thickness and weighs 138 grams. It has an upper side that’s very similar to the lower side, with metallic buttons at the top for power and camera, alternated by some bolts at the bottom or something like that. I love the way the On/OFF buttons lights up with a bright white light when you light up the device. You’ve also got a fancy metallic lid over the microUSB port also at the top and even the audio jack is there. Seems that they crammed every port at the top…

Well, on the side we have the volume buttons and the first defect I found here is the resolution: merely 480 x 800 on a 2012 phone?! Well, that’s a big no-no, especially for a 4.3 inch smartphone with an IPS LCD screen. LG Prada Phone 3.0 also comes with 8 GB of internal memory, 1 GB of RAM, 512 MB of ROM and a microSD card slot. Add to that HSDPA 21 Mbps connectivity, WiFi, DLNA, Bluetooth 3.0, NFC and microUSB 2.0 and you’re all set on the connectivity side. The brain of this fashionable machine is a dual core TI OMAP 4430 processor, with 1 GHz frequency and a PowerVR SGX540 GPU, that actually handles games well. You can see the title Six Guns in the review and I really can’t stop playing it, with those cool graphics and Red Dead Redemption style action.

At the back we have an 8 megapixel camera with autofocus, LED flash, geotagging and 1080p 30 fps video capture, plus a 1.3MP camera at the front. The back cam was underwhelming for me and it was truly nothing special, in both pictures and video. It’s just mediocre, the colours don’t feel bright enough and the video capture doesn’t handle the lighting changes well. Anyway, moving to the software side, we have Android 2.3 Gingerbread here, but all wrapped up in a black and white interface created by Prada. 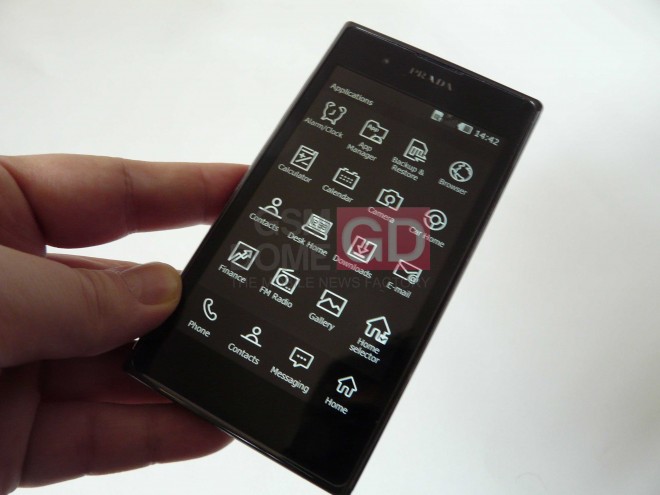 It looks interesting, but some people it’s just not the right fit. It’s also strange that among all that black and white they sneaked some colours especially on the Google app icons, since probably the search engine giant didn’t want to be part of this trendy UI move. Speaking of trendy, when you start the phone you’re greeted by a piano tune and the Prada logo, that’s also present at the top front of the phone and the back. As if you could forget who helped made it. Well, the texture of the back is also apparently similar to the one of some Prada bags or something, don’t ask me, since I’m not familiar with their fashion products. And since this is a Prada phone, I would have expected some special wallpapers, ringtones, videos, music, presentations, apps and vouchers for their products, but instead we get… nothing. Thank God I was inspired enough to check out the Prada official app from the Google Play and install it on the phone, where it fit like a glove.

Other stuff worth mentioning is the noise cancelling on this device and the Li-Ion battery, a 1540 mAh unit, that’s disappointing frankly speaking. It can only provide a day or so of active use, which is a bummer if you’re a wealthy business man or woman fond of Prada products and you want their latest phone. I must also object regarding the size of the upper buttons, that are simply too small to press and speaking of buttons, the capacitive ones below the screen are too quick to lose their lighting so you’ll almost forget which was which when their lights go out.

We have no HDMI port here in case you’re wondering and I have to say congratulations to LG and Prada for truly delivering a great audio and video experience. The videos look nice even with the poor resolution, while the audio has great quality and volume, especially with those superb headphones, that impressed me even more than the Beats units delivered by HTC. On the software side, it’s all the usual Android, plus the LG Smartworld app store with some unique applications and the Desk Home and Car Home apps preinstalled. The first one turns the LG Prada Phone 3.0 into your night stand watch, with photo gallery available, alarm and music player at hand.

The Car Home opens up voice command and GPS guidance for the typical hands free in-car usage mode. All in all, this is pleasant device when it comes to design, but it doesn’t offer enough Prada identity, in spite of the excessive branding. The black/white UI is a nice diversion from the fact that the camera is mediocre, the screen has poor resolution and the battery is crappy. Well, at least this is a fashion phone that won’t hurt your wallet. We give this model a 7 out of 10 and wonder if there will ever be a Prada Phone 4…