The latest in LG mobile technology is the Spectrum handset, that’s supposed to come to Verizon on  January 19. This is a LTE phone that was showcased at CES 2012 in Las Vegas this week. Previously the model was leaked as a pretty clear picture, with some specs attached to it. You can still find the device on the CES if you’re in Vegas. 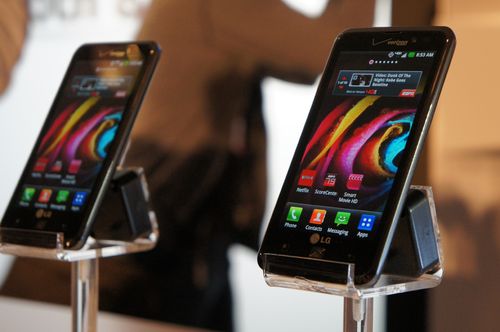 We’re dealing here with a LG 4G LTE handset that features a 1.5GHz dual core processor, 1GB of RAM an 8 megapixel camera and a 4.5 inch 720p True HD IPS screen. The specs aren’t that different from the ones of the LG Nitro HD aka LG Optimus LTE, so you’re not missing anything by not purchasing it. There’s also a 1.3MP front camera and a huge 1830 mAh battery to give you enough juice for LTE and other functions. LG Spectrum runs Gingerbread for the time being, but it’s a certain candidate to receive Android 4.0 Ice Cream Sandwich in this quarter.

The price tag of this new phone on Verizon is $199 and the launch date is, as I said, January 19th. Not that anyone has any money left from the Xmas season right now… Well, at least you can sell your older mobile and go with this one. Expect more phones from LG to come at MWC 2012.