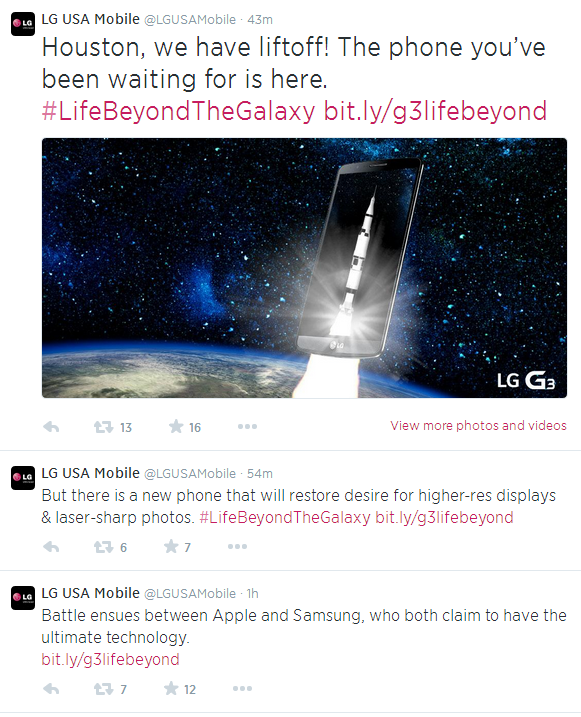 It seems that LG USA Mobile has either hired some newbies to take care of their PR or they’re simply having a field day by bantering with Samsung. Over the past 2 hours they’ve been posting tweets on their official account about every 20 minutes or so, telling us to forget the Galaxy and embrace LG G3 basically.

All of the tweets are accompanied by the hashtag #LifeBeyondTheGalaxy and also a link that doesn’t seem to lead anywhere. Part of me thinks that their account is hacked, since you can’t simply show a link that doesn’t work to your followers (it could only work in USA, I guess…). Anyway, they start off by saying “there’s a Galaxy that will soon be far, far away”. While that’s a nifty Star Wars reference, it also touches on the weak Galaxy S5 sales compared to Sammy’s expectations. 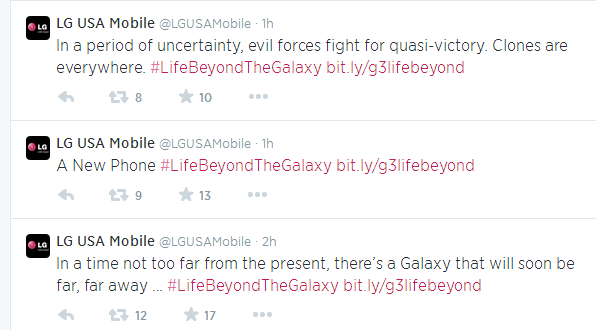 Then they talk of clones and evil forces, yet another Star Wars reference, this time with the whole Clone Wars thing. And then comes another tweet to name Apple and Samsung as the fighters in the clone wars. Finally, they get to the point, saying there’s a “new phone that will restore desire for higher-res displays and laser sharp photos”. All of these lines are typical for the beginning of a Star Wars movie and they top it all off with the image of the LG G3 taking off in space…

Bad strategy or good PR? If you ask me, too many tweets may bother followers, but the idea is nice… I guess this means that the LG G3 is ready for an US debut.