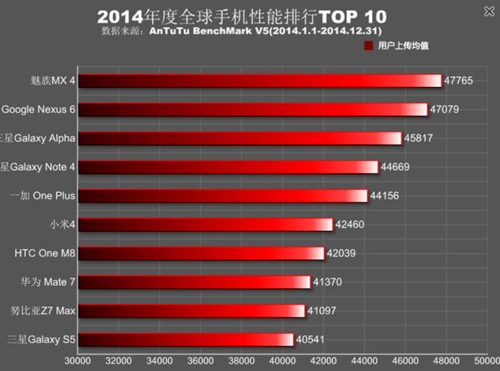 AnTuTu’s top 10 benchmarked phones of 2014 holds a surprise at first place, as you can see below. Number one is the Meizu MX4 handset, with a score of 47.765, beating out phone giants like Samsung’s Galaxy S5 and Note 4 in the process.

The second place is taken by the Nexus 6, with 47.079 and Samsung Galaxy Alpha, with 45.817, while the Galaxy Note 4 is barely fourth, with 44.669 points in AnTuTu. Then comes OnePlus One with 44.156. Even before the Meizu MX4 was launched we saw some pretty impressive benchmarks, that made it champion over many other models, but first place?! That’s a real surprise!

I really wonder how this top 10 was generated, because I personally have seen the Galaxy Note 4 scoring 50k points, in the Exynos version and the iPhone 6 Plus clearly scores 48k points, both scores beating the Meizu MX4. Also, while the MediaTek MT6595 is a powerful processor, the latest Exynos, Snapdragon and Apple A8 CPUs should be able to beat it, right?

Maybe the top was generated by an average of scores achieved by users of the devices from all over the world, some dragging down the Note 4…