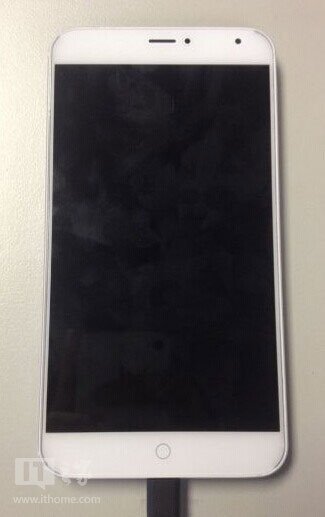 After a couple of hours ago we saw a live picture with the back panel of the Meizu MX4 and its battery, now a new photo from China let us see how the device looks on the front. Like you can notice, this one looks pretty similar to a bigger iPhone 6, a phone that will be released in September too.

Also, with these photos we get to know some other information too. It seems that Meizu will develop two different versions of the Meizu MX4. While the high-end model will offer a 5.4-inch Quad HD display (2.560 x 1.536 pixels) and a Exynos 5433 processor, the Standard version will bring a Full HD screen and a Exynos 5430 chip.

There’s also the possibility that this device to pack a MediaTek MT6592 processor too. The rest of the specs will remain pretty much the same: 3 GB of RAM, a 20.7-megapixel rear camera and a 8-megapixel front-facing camera. Is expected that this phone to come with Flyme OS 4.0 at the launch, followed by a Yun OS version too.

If you remember, yesterday, Meizu posted a few teasers about a new stunning OS that will be released soon on their phone. Even if we said that this one may be Ubuntu OS, it seems that some Chinese rumors suggest the fact that the OS in case will be Yun OS (Aliyun OS), a Linux distribution designed for smartphones based on the Android Open Source Project.