The following infographics is pretty revealing, if you want to understand the current status of the mobile OS market. The data it uses comes from Statcounter, meaning that it’s not necessarily accurate, but still, it seems pretty realistic. 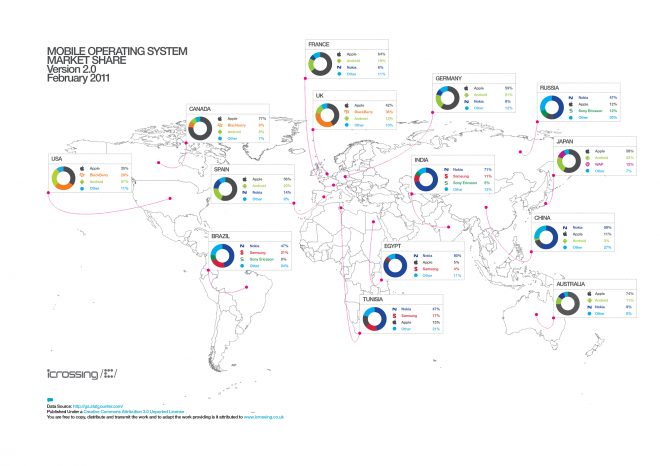 As you can see, Apple rules Canada and the USA, followed by BlackBerry and Android. The same trio, in that precise order can be found in the UK, while in France BlackBerry’s place is taken by Android and Nokia is third. Russia seems keen on Sony Ericsson, placing it third in the public’s preferences, while Nokia tops the podium.

Nokia stills rules some important markets, like the Chinese and Indian ones, real strongholds of the Finnish company’s domination, mostly because of the population’s preference for low cost devices.  Samsung also pops up a couple of times, coming in second in Brazil, third in Egypt and second in Tunisia and India. It will be interesting to notice how Nokia evolves with the aid of Windows Phone 7 and BlackBerry will manage to stay second in the States and Canada, since Android is growing so rapidly.