Just days ago, Dov Moran, Modu’s CEO was present in Romania, attending the launch event of the popular modular phone modu, broadcasted live on Mobilissimo.ro. In case you’re wondering, Dov Moran is also the founder and CEO of the M-Systems company, the one who invented the USB Flash Drive and other storage solutions. This is the man we’re talking about: 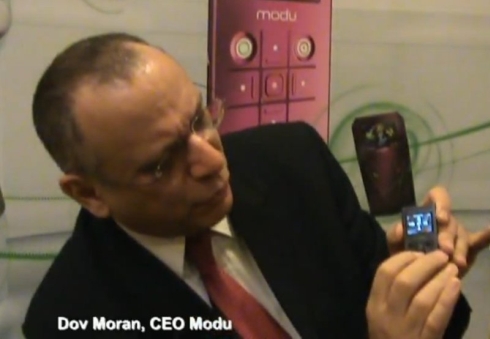 During the interviews with Dov Moran, the modu founder mentioned that the company is already gearing up for the launch of a new version of the handset. Turns out that Modu 2 will support 3G connectivity and it’ll rely on an open souce software platform, in order to support wider app development.

As far as the local Romanian market is concerned, modu will be available there soon, complete with 5 jackets, which are cases for the basic device, enhancing its features and specs, as mentioned here. The CEO also announced that modu 2 will be released in a year from now and if you want to see the man behind the concept in action, we’ve got the following video, courtesy of hotnews.ro:

The modu phone is the lightest handset in the world, a fact also mentioned in the Guiness Book of World Records. The device weighs a mere 40 grams and can be coupled with a photo frame and receive camera features via teh above mentioned jackets. It’ll reach Romania via Vodafone in mid-February, as we’ve learned from the interviews seen on Mobilissimo.ro.