Before the MWC started, the Sony Ericsson Xperia Arc was the thinnest smartphone out there, at 8.7mm, but now the title has been taken away by the Samsung Galaxy S II. This phone is a mere 8.49mm thin and it’s being demoed in the video below for your pleasure and for the sister site Mobilissimo.ro. 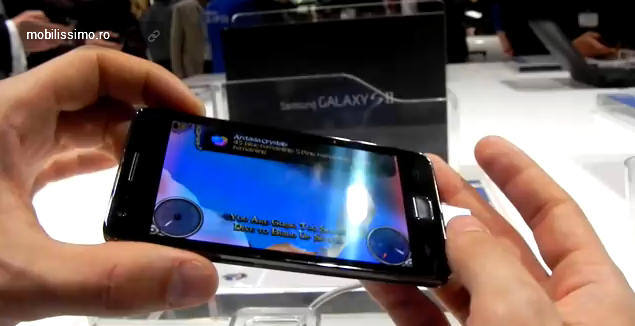 We’re dealing with a handset so thin and light, that people at MWC asked to see if it has the battery attached or not. Samsung Galaxy S II weighs a mere 116 grams and its screen is around 8mm in thickness, the thinnest on the market at this moment. As you can see in the clip, we’re taken for a tour into the Hubs on this device (Music Hub, Readers Hub, Game Hub and Social Hub).

There’s also an option called Live Panel, allowing users to personalize their homescreens and include feeds and apps. Back to the Hubs, the Social one includes Facebook, texts, Twitter and IM, while the Music Hub provides access to 12 million songs, that you’ll have to pay for, if you want the full tunes. However, you can get free 30 to 60 second previews and even create albums of these preview tunes.

Each week the top 20 tracks and recommended songs will be shown to the user, depending very much on the country he’s in. The Reader Hub includes over 2000 newspapers and you can also read magazines and books. You’ll have to pay for these, in case you’re wondering. In order to pay, you need to log in with your user name and password and then use the credit card.

Still in the Readers Hub, you can highlight portions of the text in the e-books and store them. Finally, the Game Hubs show us a bit of the accelerometer fun, with a title made by Glu. We’re also informed that battery life is pretty good, although it’s not specified yet, since this is not the final unit. Expect this beauty to reach stores in March or April!