One of the LG products at the Mobile World Congress 2011 event in Barcelona was the very first dual core smartphone, LG Optimus 2X. This device is already on sale in some parts of Europe and it was showcased to us, with a focus on the connection to a HDTV, either via HDMI or DLNA wireless streaming. 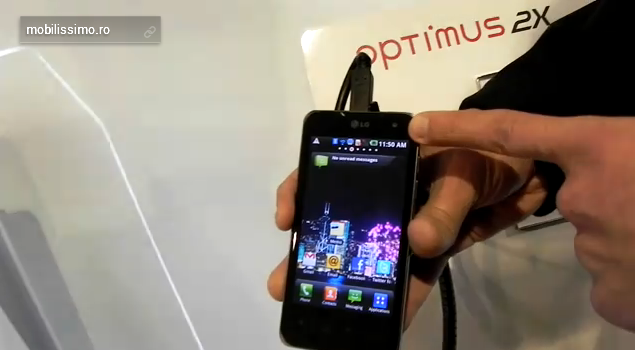 Both media playback and gaming are taken to the big screen with the aid of these features and American football gaming title we’re shown is actually pretty decent for a mobile game, especially when shown on the TV. LG Optimus 2X uses the above-mentioned dual core processor, that’s an Nvidia Tegra 2 model @ 1GHz, used to run Android 2.2 for now, with a Gingerbread upgrade coming later.

Also on board there’s a 4 inch touch display, with a 480 x 800 pixel resolution, while at the back of the smartphone we find an 8MP camera with 1080p video capture at 24 fps. In the same hands on video you can find in this article you are shown a bit of media playback straight from the handset to the big screen. Looking great!