We’ve had many pleasant encounters at Mobile World Congress 2011, with top notch devices, but the Motorola Xoom experience will remain in our heads for a long while. This Android 3.0 Honeycomb unit is as powerful as it gets, to the point where we almost say that the $1200 price tag (rumored) is right… 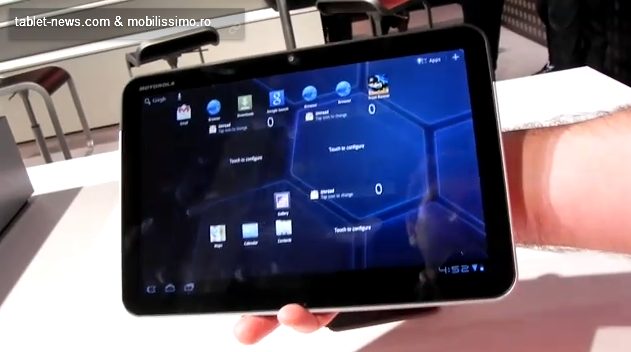 The device comes with a 10.1 inch touchscreen display, supporting a 1280 x 800 pixel resolution and protected by the Gorilla Glass layer. Under the hood there’s a 1GHz processor (dual core Nvidia Tegra 2) running Android 3.0 with the aid of 1GB of RAM. 32GB of storage are also in the mix, as well as a 5MP camera at the back with LED flash and 720p capture, accompanied by a front 2 megapixel cam for videocalls.

A HDMI 2.0 port completes the package and moving on to the software experience, Honeycomb is friendlier than ever, especially considering that this is the very first Android 3.0 tablet. Customization, widgets, moving panels, 3D graphics, great video playing, a 3D YouTube app and true multtiasking are to be found in the same hands on video.

Also, you’ll be able to get the Motorola Xoom with a bunch of very appealing accessories, that include a Bluetooth keyboard, a speaker dock and various cases. Battery life should be around 8 to 10 hours!