We’re still in Barcelona giving you and our sister site’s public a first taste of the Xperia Arc, formerly known as the thinnest phone in the world. In its middle the phone is 8.7mm thick, but meanwhile Samsung Galaxy S II was launched, with an impressive 8.49mm waistline. Back to the Arc, this brilliant uses the best Sony technologies at the moment and specially Bravia. 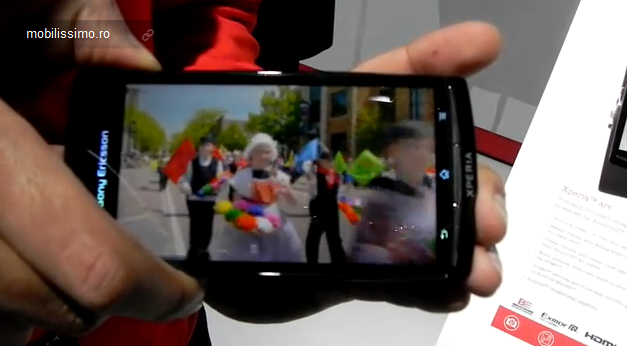 This hands-on clip focuses on the ability of the Bravia mobile engine to change picture quality and enhance colors on this device. Sony Ericsson Xperia Arc uses a 1GHz processor, runs Android 2.3 and it’s a flagship handset for SE. Its video quality is impressive and at the back we spot an 8.1 megapixel camera with flash and Sony Exmor technology.

The camera is 720p HD capable and at the top of the phone there’s a HDMI socket that brings the media to your TV. Xperia Arc’s screen uses Clearblack technology and the video streaming is also influenced by the Bravia engine, adjusting the noise in the image. While watching video you can press a button and activate the Bravia settings, increasing the quality, if you want.