Toshiba is also present at Mobile World Congress 2011, where it brought both a tablet and a waterproof phone. We’re talking about the Toshiba Regza model, that you can see below. As shown, the handset is “rained upon” in order to test its waterproof abilities.

This is an Android 2.1 device, but let’s hope for an update when the unit is launched via Japanese carrier NTT DoCoMo. It also gets a NFC chip and a 4 inch screen with a 854 x 480 pixel resolution. A GPS is also on board and the main selling point of the device is its 12.2 megapixel camera. The interface looks hot and we bet that Bluetooth and WiFi are also among the specs.

More info will be available later! 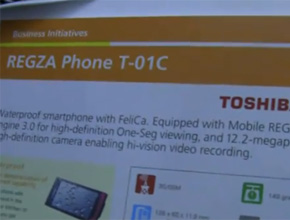