The Samsung Galaxy Grand is one of the most appealing dual SIM phones you can get out there. We’re dealing with a 5 inch smartphone, actually the first one with this diagonal that Samsung unveiled late last year. 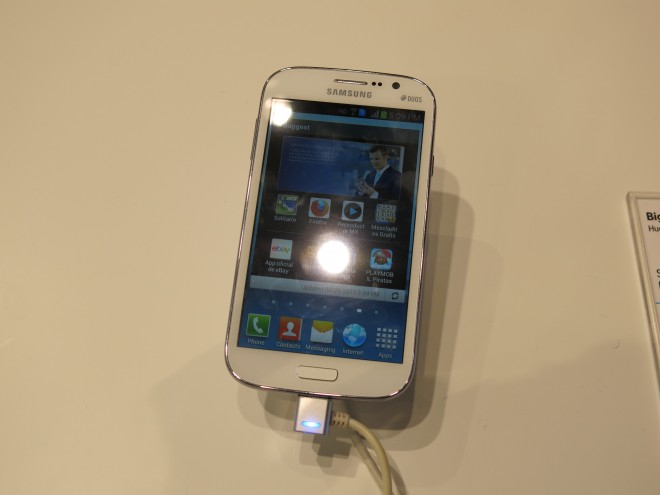 Now this model was brought to Barcelona, at MWC 2013 and it doesn’t look half bad. The design keeps the Galaxy S III line and combines it a bit with the looks of the Galaxy Note II. The device has a physical Home button and its display seemed pretty crisp, as shown at the Samsung booth. The case uses the same plastic material as the Galaxy S II and it’s not as thick as you’d expect, at 9.6 mm. The device measures 162 grams in weight and supports a 480 x 800 pixel resolution.

Other specs include a microSD card slot, 8 GB of storage, 1 GB of RAM and HSDPA 21 Mbps connectivity. There’s also an 8 megapixel camera at the back, with autofocus, dual LED flash, geotagging and image stabilization. The device runs Android 4.1.2 Jelly Bean on top of a dual core 1.2 GHz, with TouchWiz customization.