We’re on the MWC 2013 floor snooping around for hot devices and we already came across one: the Sony Xperia Z smartphone, that you can check out below. This is the famous 5 inch handset that was showcased back at CES 2013, a very solid flagship that Sony pits against the likes of HTC One and Samsung Galaxy S IV in the future. 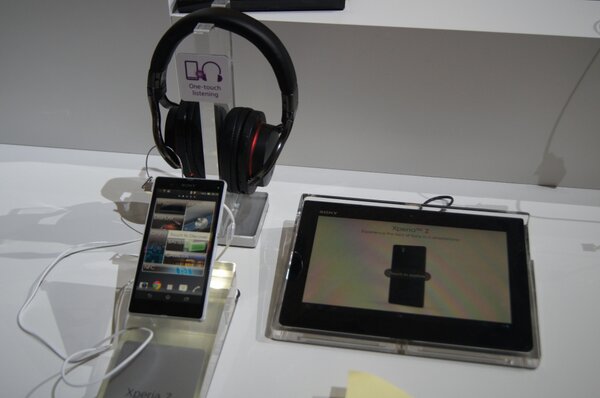 As you can see the device was showcased next to a pair of headphones and a tablet, that might as well be the Xperia Tablet Z, but it could also be an older model, since it seems to have a slope. The Sony Xperia Z has a micro SIM card slot, it was announced at CES 2013 and it has already hit some retailers in Europe. In Germany for example it’s priced at 600 euros or so.

This handset measures 7.9 mm in thickness, packs a 5 inch Full HD Screen with Sony Mobile Bravia Engine 2 technology, a microSD card slot, 16 GB of storage and 2 GB of RAM. At the back there’s a 13 megapixel camera with autofocus, LED flash, HDR video capture, 1080p 30 fps video capture and video stabilizer. The exact same sensor may make it to the Galaxy S IV, from what we’ve heard…

Anyway we’ll be back with more details in a few days, so rest easy!