Samsung Galaxy S9 has finally become official at MWC 2018 in Barcelona and it’s exactly as expected. We got to handle it quite fast, even a bit before the official unveiling, I’ll admit and have the first impressions below. This is a 5.8 incher, a flagship of the year 2017 and the first Snapdragon 845 phone we see. It does have a variable aperture, as rumored, so let’s check it out.

Samsung Galaxy S9 feels exactly the same in the hand as the Galaxy S8, maybe slightly heavier. It measures 8.5 mm in thickness and weighs 163 grams, so it’s both heavier and thicker than the S8, at the same diagonal size. It’s still made of metal and glass, with a curved glass panel at the back and a curved front panel too. A metal frame made of aluminum rests between them. 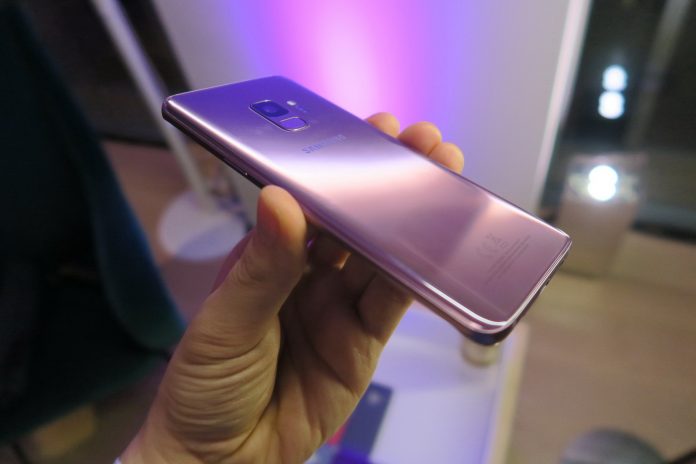 One hand usage remains amazing at 5.8 inches and buttons are comfy. I’m moving the new shade called Lillac, perhaps even more than I should for the average male. The device is also available in black and Coral Blue and it comes with IP68 waterproofing. By the way, Samsung has cut the top and bottom bezel in a visible way. 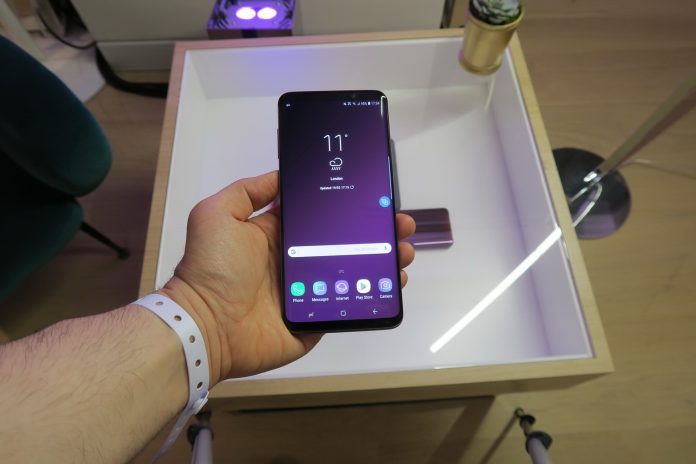 The screen available on the Samsung Galaxy S9 is a 5.8 inch Super AMOLED panel, of the Infinity Display variety with a 18.5:9 aspect and a Quad HD+ resolution. It has very narrow bezels, it’s highly immersive in both video playback and games. The curved Edge portions are still here, with shortcuts shown. I have to say the screen is also very bright, from the dozens of minutes I’ve played with the phone in dimly lit rooms. 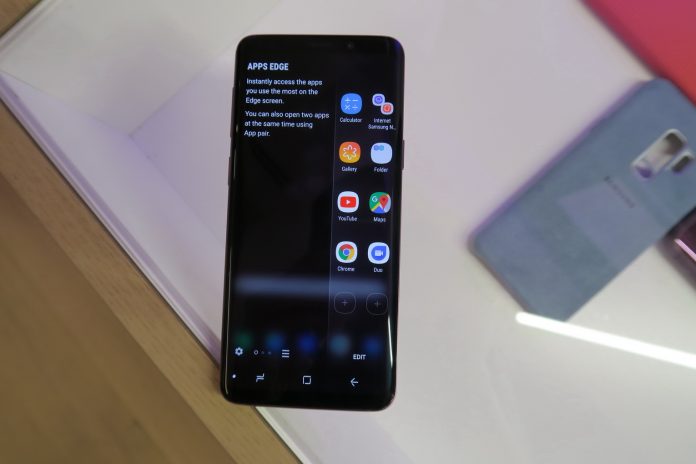 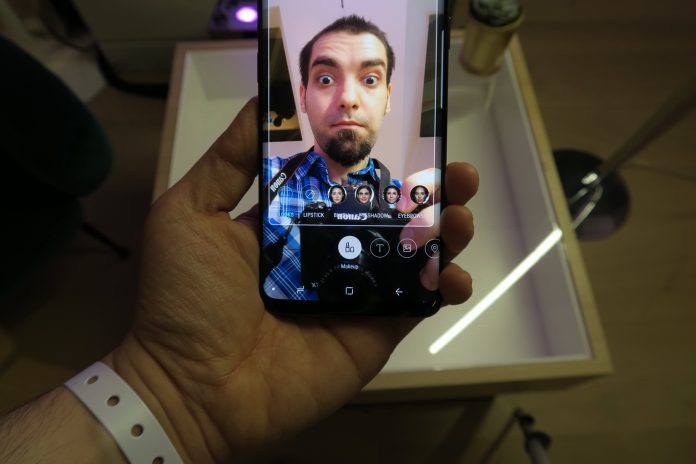 Samsung Galaxy S9 does indeed have a variable aperture camera and the variation from F/2.4 to F/1.5 happens mechanically with actual moving parts. There’s a 12 megapixel back shooter here, with OIS, LED flash and 4K video capture. This is a Super Speed Dual Pixel camera, that focuses very fast and is very fast to adapt (in auto mode) to low light capture. Bokeh can be achieved via software through Selective Focus.

Another novelty is the Super Slow Motion capture, at 900 FPS, which turns a 0.2 second capture to a 6 second one. I had the chance to see this feat in action, with a water balloon being popped and the water bubble remaining behind it in slow mo. It looked fantastic, I’d say better than the Xperia XZ1 achieved. The camera app has also changed a bit, with the main capture options shown in a vertical scrolling area, not on a full screen as toggles. 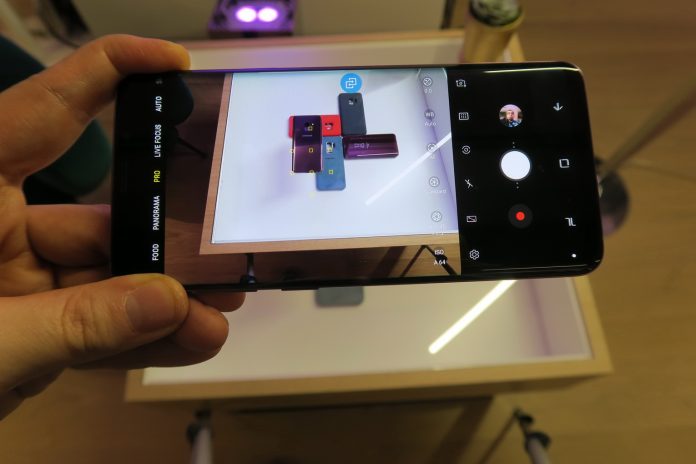 I find this less comfy than before. Back to novelties, there’s Emoji AR, which takes a selfie, scans your face and turns you into a 3D avatar, a 3D emoji basically. I tried it out and found mine to be pretty similar to my actual face, so kudos Samsung for that. You can also customize it with glasses, clothes, hats, new hair colors and more. It’s also shareable via social media, chat and more.

The camera is able to use Bixby Vision to translate text in real time, identify touristic landmarks, fine wine brands and my personal favourite: detect calories in food. Selfies are taken with an 8 MP camera with F/1.7 aperture and QHD video capture. 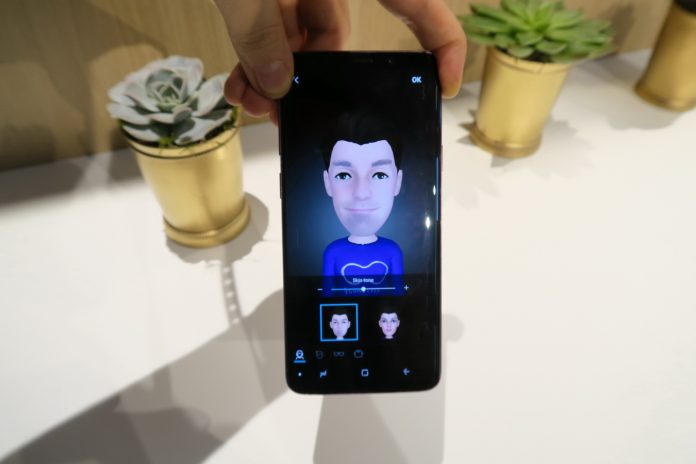 Samsung finally answered everybody’s prayers and implemented dual stereo speakers on the Galaxy S9. There’s one at the top and one at the bottom, with AKG tuning, just like the bundled headphones. There’s also Dolby Atmos and one of the most kickass surround experiences I’ve heard, ever. I actually felt the sound being spread all around me with a nifty surround. 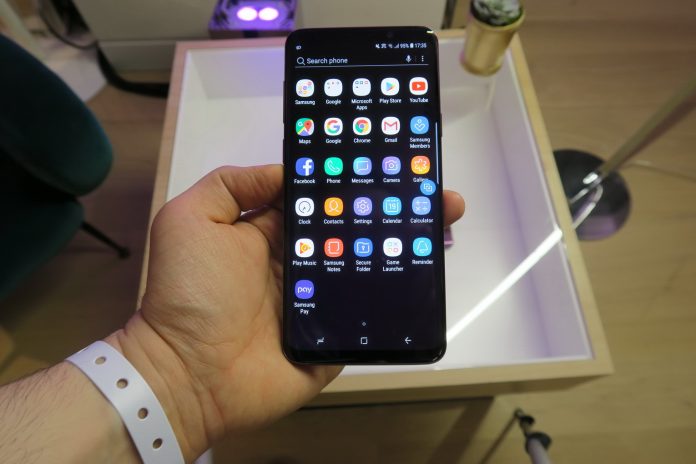 Security is bumped up with a new version of Knox, mixed up with a new flavour of face recognition and iris scanner. The fingerprint scanner has moved below the main camera and it’s comfier to use.

Accessory-wise, the main novelty is the DeX Pad, a sort of flat horizontal dock, where you place the S9. There’s USB Type-C and HDMI connectivity and this dock lets you use the S9 as a PC replacement. It hooks up to a big display, keyboard and mouse, for a desktop experience. There’s multi window, resizable windows, multiple resolutions, gaming and more. You can use the S9 as a touchpad and keyboard too. 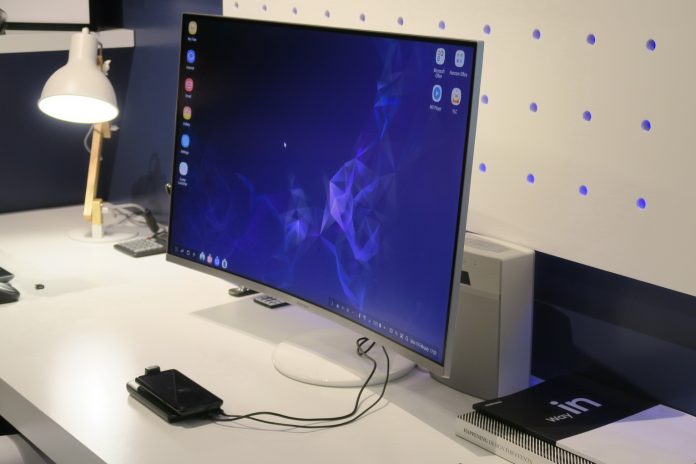 Samsung Galaxy S9 runs on Android 8.0 Oreo with a new Samsung Experience on top, which feels like the previous gen UI. There’s a lot of white, no borders for widgets and icons, lots of options and a Bixby homescreen. It aggregates the data you need, from YouTube vids to S Health stuff, suggestions, news and more. Bixby is also available as a smarter virtual assistant, that’s faster, has more languages supported and is more conversational. 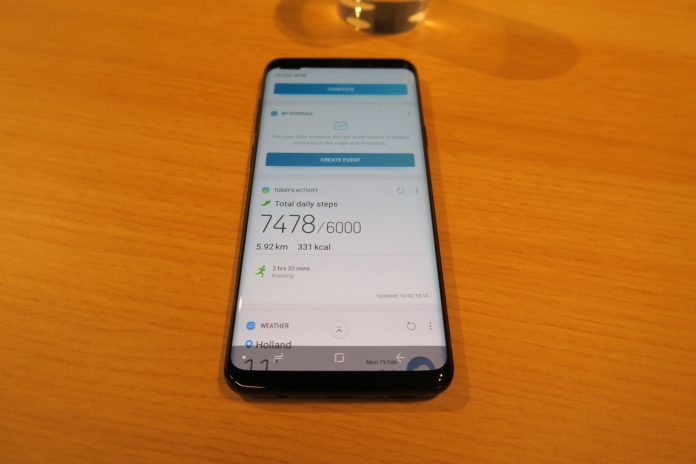 Now you can rotate the whole UI in lansdcape mode and we also have Edge Light Notification, a feature that lets you respond to notifications on the curved edges while watching a movie. Samsung also unveiled a special solution used to control smart home items. 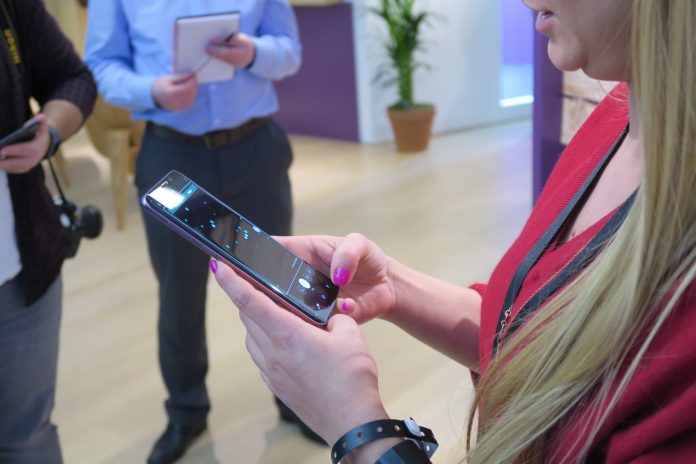 Samsung Galaxy S9 is up for preorder right now, priced at around $900 and shipping on March 16th. Conclusions? The Samsung Galaxy S9 is exactly as leaked and I’m surprised to see that they went through with the mechanically variable aperture. That’s a huge evolution for such a slim phone and they’re doing Super Slow Mo better than Sony for sure. Snapdragon 845 is a beast, I can tell you that already and AR Emoji is cute, but still just a gimmick.

The design is largely the same and the stereo speakers are certainly welcome in this day and age. This feels like more like the upgrade from Galaxy S6 to S7 than the one from S7 to S8 I’d say.