Antoine Brieux is a name you’re familiar with, if you’ve followed his phone designs and concepts. Now, he’s back with what looks like a juicy new HTC smartphone, but is in fact another concept: the HTC Touch HD Dual (HDD). Here’s the fresh device: 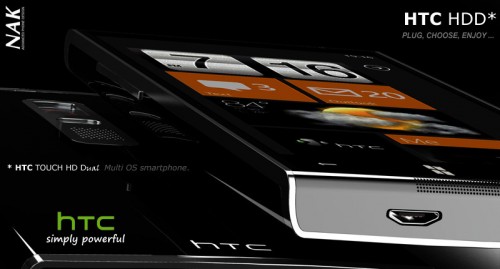 We’re talking a multi OS smartphone here, created by Antoine and sporting a pretty thick case. We’re expecting to get at least a projector inside this unit, considering its thickness and maybe even a 1.5GHz CPU. In the meantime, the eagle eye spots Windows Phone 7 running on the handset and those who are rushed might say that this is in fact HTC HD7…