A recent iSuppli teardown of Google’s Nexus One phone revealed that the handset’s components are worth $175, their prices being divided as seen in the tablet below. The handset, unveiled a week ago runs Android 2.1, is made by HTC and packs a beautiful 3.7 inch AMOLED display. 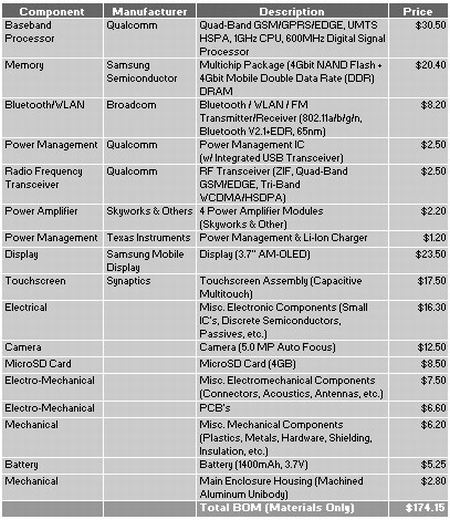 Nexus One will retail for $179, with a 2 year T-Mobile contract, while getting it without a subscription will have the owner paying $529. iSuppli’s analysis found that the Nexus One costs $174.15 to make, but that doesn’t include the manufacturing costs, packaging or software.

The most expensive component of the 17 included on the list is certainly Qualcomm’s 1 GHz Snapdragon CPU, going for $30, or 20% of the handset’s total cost. Android 2.1 takes full advantage of this solution, using a fast UI, smooth running apps and supporting 720p video playback. Next on the list is Samsung’s 3.7 inch AMOLED display, with a price of $23.50.

Third comes Samsung’s 4Gbit (512MB) DDR DRAM memory, going for $20.40, or 11% of the Nexus One total cost, estimated by iSuppli. Will this device manage to be at least as commercially successful as the iPhone, or trail behind? Its specs show that it’s got what it takes to make it big…