While there’s no real reason for HTC to deliver 4.7 inch screen phones, Samsung and Google actually have an explanation for the similar diagonal on the Nexus Prime. At least so it appears, if we’re to take the opinion of reddit user thantik, who drew up the schematics below. 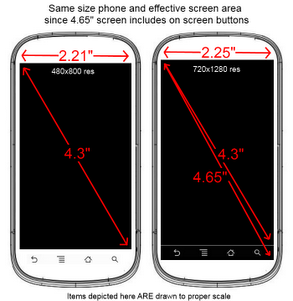 We’re dealing here with a smartphone that uses a 4.65 inch 1280 x 720 pixel display, so that’s 0.35 inch bigger than most modern high end phones. The 0.35 might in fact be used to incorporate the Android navigation buttons that will soon move to the handset’s screen. Those of you who ever used a Honeycomb tablet will be familiar with these virtual buttons, especially Android Ice Cream Sandwich includes the same control means.

Not even a Home button is included in its physical form, since Honeycomb is all about touch and so will version 4.0 of Android. The fact that we’ll use the trademark Home, Back and Menu buttons from Honeycomb on Android Ice Cream Sandwich was confirmed by the Nexus Prime leak from last week. The mockup here makes a lot of sense, but I wouldn’t bet on any design features right now, especially with the first Android 4.0 device being delayed.