If you’ve been following our website, I’m sure you know that there’s a piece of news about the Nexus Prime every day lately… After finding out that the device will be launched next week on October 19th, now Verizon gives us a fresh leak: the official US name of the phone and its connectivity details. 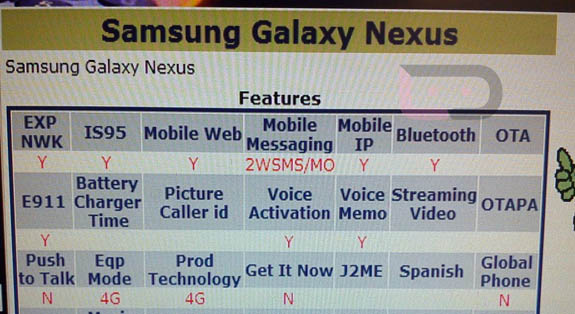 Nexus Prime will be called Samsung Galaxy Nexus on Verizon and it will come with 4G LTE connectivity, as a leak from the carrier’s system details. What this means is that the phone could be a Verizon exclusive for a while in the States and then come to the rest of the carriers. It’s important to mention that the “N” next to the handset’s name means it won’t be a world phone, so no luck if you travel a lot.

There will probably be a separate GSM version with the name Nexus Prime, or maybe a world phone will come later on… Whatever the case, everything will become clear next Wednesday, when the dual core HD display smartphone with Android Ice Cream Sandwich will become official in Hong Kong!