Google is pushing its Android products that’s for sure, as it was recently found by the folks of Mobilissimo.ro, who discovered in the Romanian version of Google a tiny reminder that the Nexus S was launched locally. Said reminder was placed below the search bar and pointed towards a product page, followed by the Vodafone page for buying the handset. 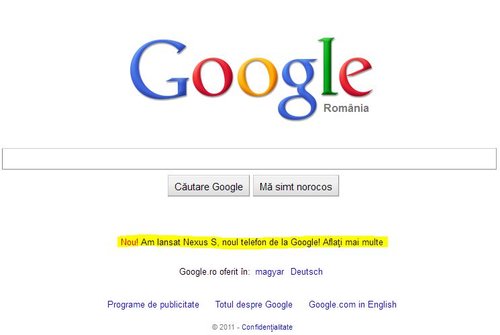 This is the very first Android 2.3 smartphone on the market, one that we reviewed for you here and also a very impressive Samsung machine. We remind you that Google also pushed the Nexus One in the same way, hoping for betters sales, but the first handset was never that successful. In case you’re wondering, the Nexus S is priced starting from 239 EUR in Romania, with a Vodafone contract.