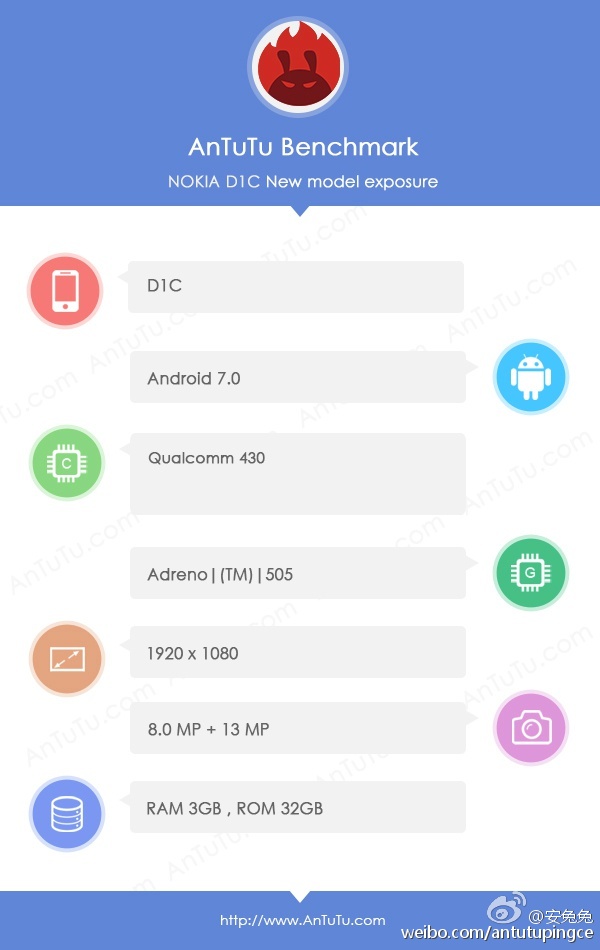 The series of Nokia-related leaks continues, today with the Nokia D1C midranger popping up again. Previously, the device appeared in GeekBench’s database of tests and now it’s AnTuTu’s turn to leak it. This model is supposed to be part of the new wave of products coming from Nokia under its own brand, since its obligations towards Microsoft expire in Q4 this year.

Anyway, the Nokia D1C reveals more specs this time, compared to the GeekBench leak, including a Full HD screen, a 13 megapixel main camera and an 8 MP selfie shooter. We also get 32 GB of storage and 3 GB of RAM, while the Snapdragon 430 CPU and Android 7.0 Nougat OS were already known. Some of these specs sound very good, but the CPU makes us really think of a midranger.

It appears that the Finns are betting big on selfies for this handset, since its front camera is the only feature surpassing the norm here. I’ll remind you that Foxconn and HMD will handle the new Nokia devices, that are expected over the next two months, or worst case scenario in early 2017. We also expect a flagship to leak soon.

Xiaomi Redmi Note 9 Pro Unboxing: Possibly the Most Beautiful Back...