We all know that Nokia is preparing “a market disrupting product” for June 21st in Singapore, but now we have a slight hint of what they might announce. The info comes from Fernando Freytes, Nokia’s Manager of Marketing Services in Argentina, who tweeted that the company plans to launch S40 models with 1GHz CPUs. 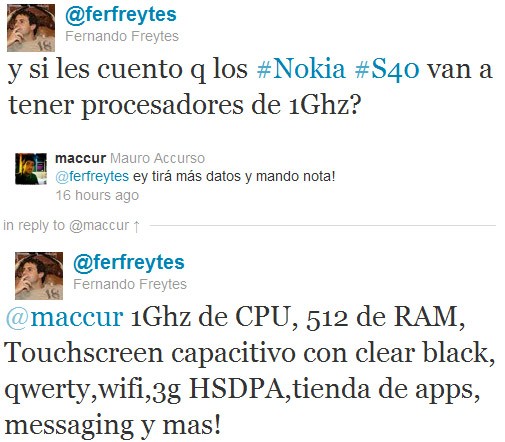 He even went as far as to add more specs, such as 512MB of RAM, a capacitive touchscreen display with Clear Black technology, WiFi, 3G HSDPA and a QWERTY keyboard. At the end of 2010 analyst said that around 1.5 billion S40 devices were sold all over the world, so Nokia could be planning to sell its next billion capitalizing on such specs.

Imagine that each and every person from a poor country could have his/her own 1GHz phone at a very low price, first running the S40 OS and then maybe getting Windows Phone 7. Wouldn’t that be an amazing plan? I guess so, but let’s wait for the Nokia Connection 2011 event before making such judgements.