Nvidia has started sending out invites to its MWC 2012 event, that seems to be about quad core phones, among others. Under the tagline “Nvidia quad core firsts continue at MWC”, we get to see a picture of a guy holding a smartphone in his hands, that may just be one of the first Tegra 3 handsets shown in Barcelona. 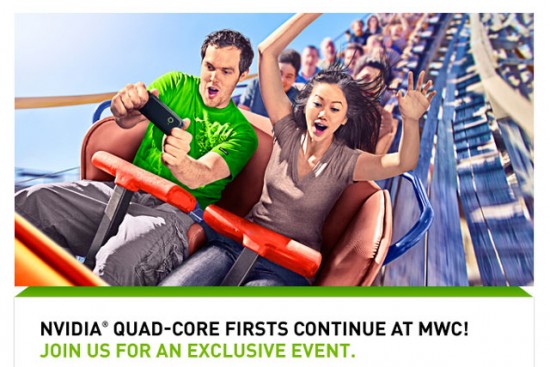 There were already a couple of Tegra 3 tablets shown at CES 2012 and now Nvidia wants to give us a taste of its technology on the smaller screens. LG already has the X3 quad core handset leaked and ready for showcasing in two weeks, while HTC is rumored to go with Qualcomm this time. Samsung has the Exynos to rely on, when it comes to quad core, so I guess Nvidia will have to partner with the likes of LG, Huawei or Acer. Lenovo and Intel seemed like a match made in heaven at CES, so they’ll probably keep using Intel’s CPUs.

Texas Instruments is also a rival to look out for, since they’ve been powering quite a bunch of decent handsets and tablets lately, including the Galaxy Nexus and Motorola Xoom 2. Nvidia ruled the smartphone market last year, being the favourite dual core CPU on Android phones, but will it do a repeat this year?