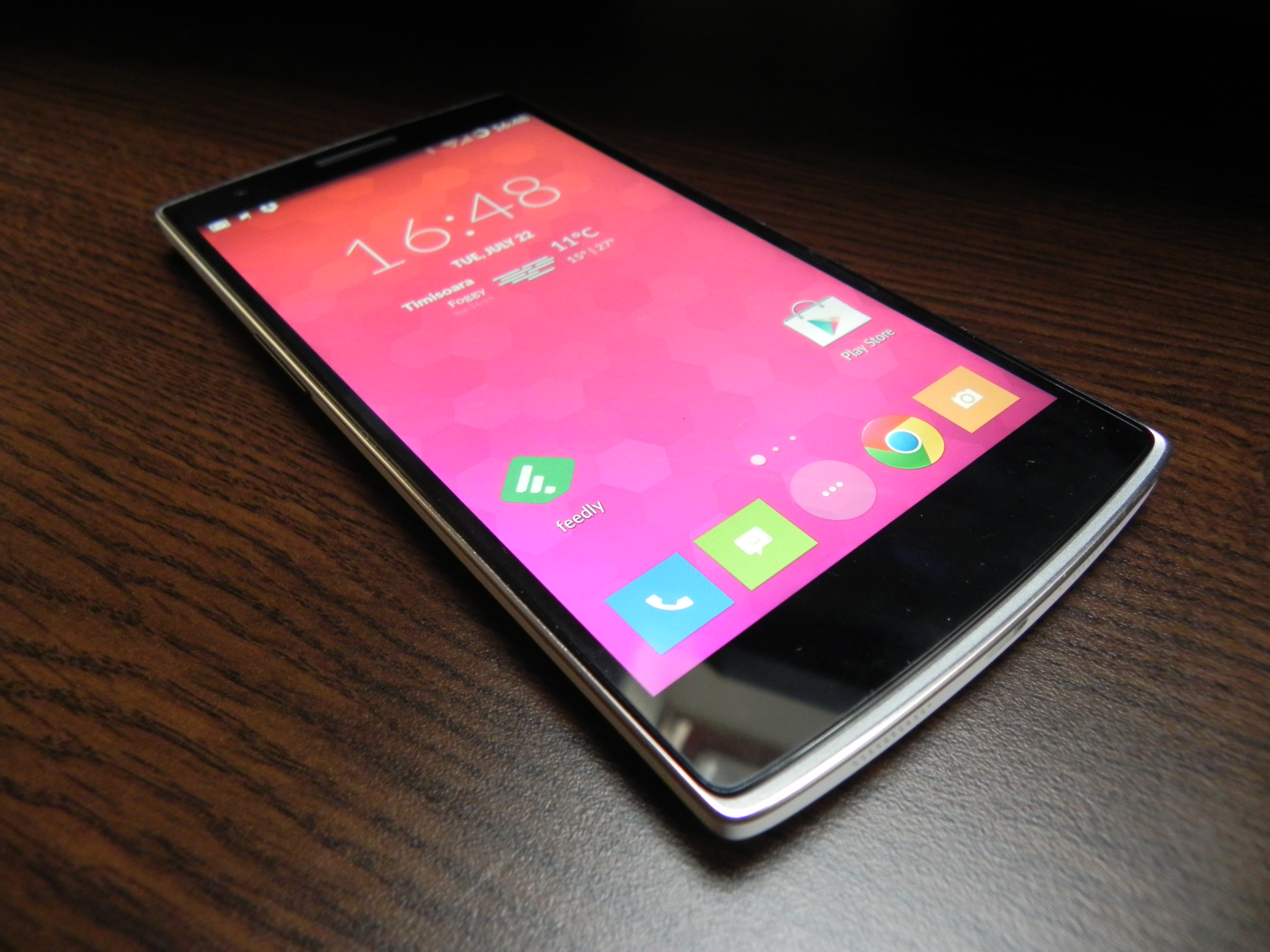 OnePlus One is a handset announced back in April this year and launched in June and we purchased it from Pandawill, then it took it 40 days to reach us. It’s a hyped and rare phone, that requires invitations to actually get to purchase it apparently. Anyway, the price tag for this smartphone is $300 and the company behind it, OnePlus is young and just starting out, so for their first phone they’ve done a terrific job. 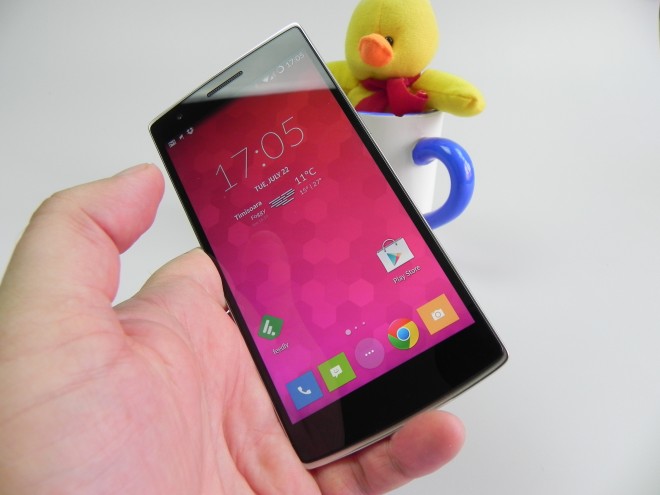 The design reminds me of Oppo devices, which is not exactly a wrong sensation, since the team at OnePlus is made of people who left Oppo at some point. This is a 5.5 inch phablet with an 8.9 mm thickness, weighing 162 grams and offering a screen with small bezels. It’s both taller and thinner than the Galaxy Note 3, if you want a quick comparison. The design is pretty simple and it involves polycarbonate as the material of choice.

The handset offers good grip and it comes with an aluminum-like frame, that’s all around the edge of the model. Its sides are flat and the back is slightly rounded. Many people consider this an Oppo Find 5 lookalike and they’re not very wrong to think that. There are also slightly rounded corners here and by the way, to get an idea of what we’re dealing with here, know that the OnePlus One is 6 mm longer than the LG G3 and you can feel that this is a very long phone. 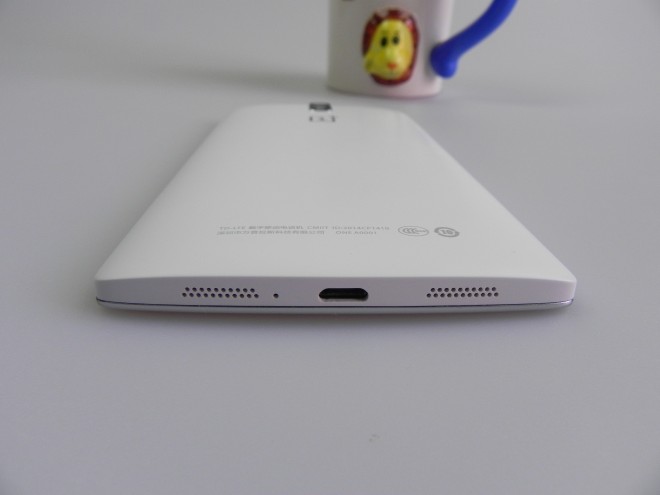 Upfront we’ve got an earpiece, front camera, capacitive buttons, proximity sensor, ambient light sensor, while at the back there’s the main camera LED flash and microphone. At the top there’s the audio jack and microphone, while at the bottom we’ve got a microUSB port, speakers and yet another microphone. On the left side you’ll find the microSIM tray, that’s removed with a metal key and the volume button is also there, but it’s a bit too thin to be comfy to use.

On the right side there’s an On/Off button that’s also too thin and small to be comfortable to use. This is a very big phone, but you can get used to it. Keep in mind that its facade is a big fingerprint magnet. As far as hardware is concerned, we get a quad core processor, a Snapdragon 801 2.5 GHz unit, the Adreno 330 GPU, a 5.5 inch IPS LCD display with Full HD resolution and 401 ppi density, as well as 16 GB or 64 GB of internal storage. There’s no microSD card slot and other specs include 3 GB of LPDDR3 RAM, a 13 MP back camera with LED flash, a front 5 MP shooter and on the connectivity side there’s HSDPA with 42.2 Mbps download speed, LTE, WiFi, WiFi Direct, DLNA, NFC, Bluetooth 4.1, microUSB 2.0 with USB OTG and USB Host. 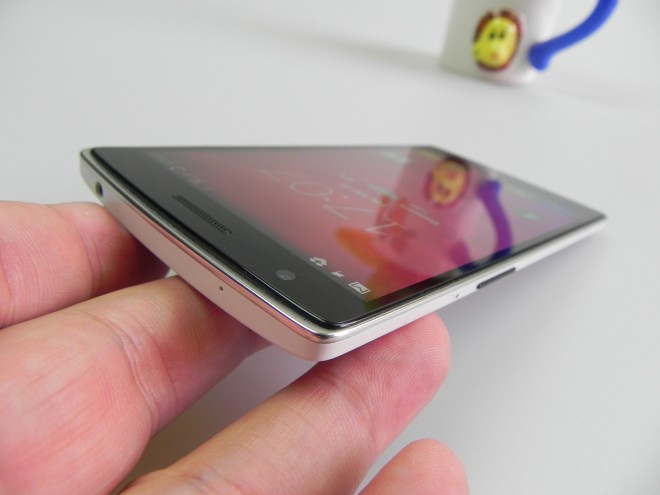 There are dual mono speakers included, an accelerometer, gyroscope and compass, while the battery is a 3100 mAh unit (Li Polymer). This battery offers 8 hours and 54 minutes of HD video playback, with WiFi on and brightness at 50%. Meanwhile, the LG G3 offers 5 hours and 6 minutes and the HTC Desire 816 offers 7 hours and 44 minutes, so I’d say we’re doing fine in the segment of 5.5 inch phones. The charging takes 1 hour and 50 minutes, which is also good.

The standby time is not very good, since you’ll lose quite a big percentage while you leave your phone in standby at night. There’s no power saving option here, aside from a small toggle in the dropdown area. As far as audio goes, there’s no audio player installed, so we had to install Google Play Music. There are also no headphones bundled, but we made do. There’s a visualizer in the lockscreen that looks minimalistic and we’ve got dual mono speakers on board. The speakers offer high volume, good bass, crisp sound and warm sound. There’s a special Audio FX app preinstalled, with a lot of welcome options for audiophiles. 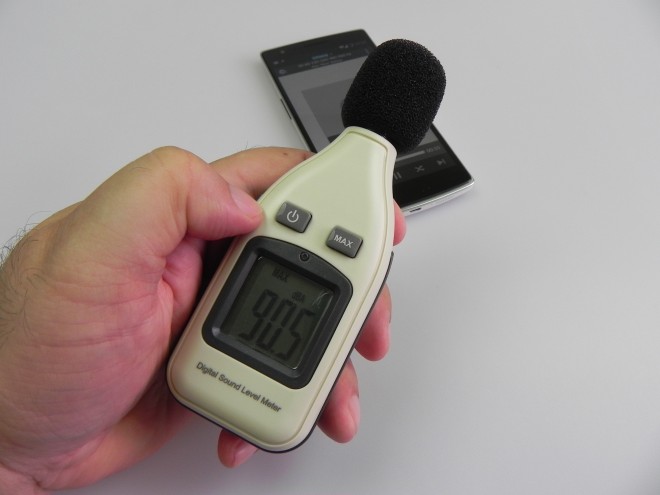 We’ve got options for Speaker, Headset, USB, Bluetooth and Wireless, plus presets for genres. There’s also a Custom option, bass boost and surround as well. There’s a series of options including small room, large room and hall (medium/large) for the Reverb section. As far as decibels are concerned, we achieved 90.5 dBA in our test, the highest score since we’ve been using a decibelmeter. I’d even say it beats or equals the HTC One M8, if I can dare, so the audio is very good.

As far as the display is concerned, this one is a 5.5 inch 1920 x 1080 unit and an IPS LCD screen with 401 ppi density. There’s no video player preinstalled here, so we had to install one, just like the music one. The screen is bright, we’ve got realistic colors, wide view angles and this display is made using Japan Display tech and LTPS. There’s Gorilla Glass 3 technology on board and the screen offers a crisp and clear image. The blacks are not very deep and contrast is not so good, but the screen behaves well in sunlight. 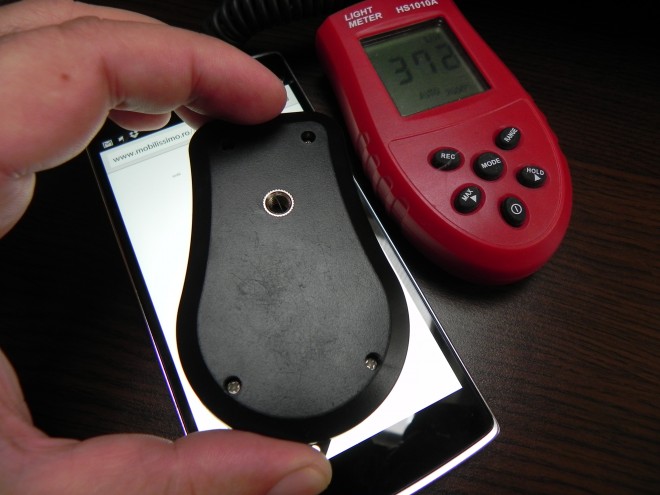 The pixels are of the RGB Stripe kind and this model offers a brightness of 404 LUX at the top of the screen and 372 LUX at the bottom of the screen. I’d say we’re doing pretty fine, seeing how the Xperia Z2 scored 366 LUX and the LG G3 stopped at 343 LUX, but there’s better, since the Galaxy S5 reached 480 LUX. The Settings area includes some Display related options, such as rotation degrees, Cast Screen, adaptive backlight (dynamically adjusts brightness for more battery life), double tap to wake and screen color. The latter includes options like Vivid/Standard and Custom, with sub options for Hue, Contrast, Saturation and Intensity. Overall, this is a good display, but it doesn’t break any records. 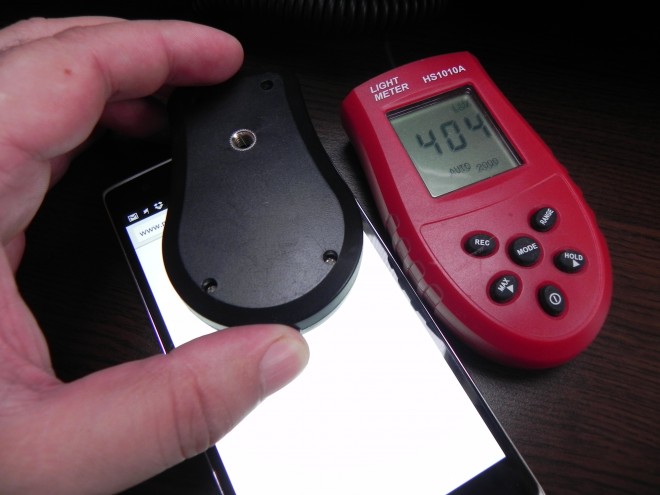 And now let’s analyze the camera a bit. We’re dealing with a 13 megapixel shooter, with a dual LED flash and a 5 MP front camera for selfies. The main camera’s sensor is a Sony IMX 214 CMOS, measuring 1/3.06 inches and offering F/2.0 aperture. It’s pretty much the same sensor as the one from the Oppo Find 7 handset, with a 6 lens setup in the mix. The UI is pretty much stock Android with CyanogenMod tweaks. At the bottom we’ve got the main options, like front camera shortcut, flash, options and settings. On the right there’s the video button, shutter button and panorama. You can zoom up to 4X in the UI and we’ve got a fast focus and very fast photo capture. 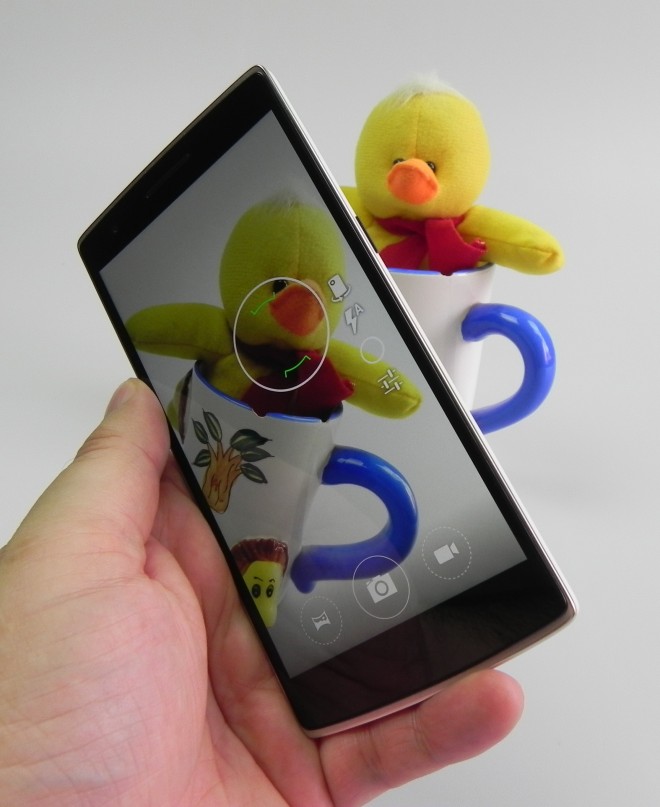 Audio codec is either AMR-NB or AAC and the Others section includes volume keys to use zoom, left handed use or power button for shutter purposes. Now let’s get to the actual picture taking. The photos taken with the OnePlus One offer realistic colors, no oversaturation and good brightness. The HDR is more natural than usual and doesn’t only increase brightness. The Flowers mode was also tested and it slightly exaggerates the image, but the result is impressive. Slow shutter triggered some impressive water jet shots and in spite of taking pics during a very sunny day, shots had good lighting and pics didn’t come out burnt. 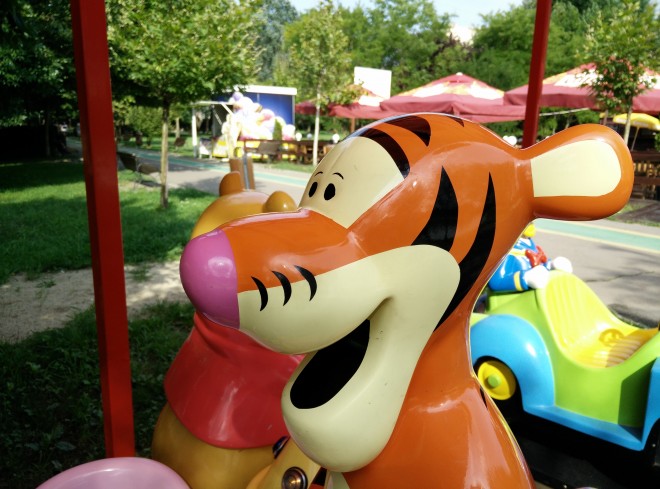 The macro of that tiger toy was also nicely done and panorama is pretty good as well. Landscape shots are good and sometimes I must say that the pictures feel a bit under saturated and a bit cold. If you zoom into the shots I’ve taken you’ll see noise appearing a smidge faster than in the pictures taken with the other 2014 flagships. I would say this camera is on the same level as the HTC One and HTC One M8, second tier flagship cameras this year. It’s not on par with first tier like Galaxy S5, LG G3 or Xperia Z2, that’s for sure. At night the flash exaggerates the brightness and shots look yellow-ish without it. I still managed to produce decent closeups with the flash on.

On the video side, I regret the lack of stabilization and the quality loss when zooming in. Slow mo looks OK, but the Full HD 60 FPS sample is certainly less impressive than other models with smooth filming abilities. The image of the videos is crisp, lighting is good and everything feels a bit cold here as well. 4K DCI vids look great and crisp. Night filming is also plagued by yellow tint and exaggerated flash. Video capture is done with stereo audio and 4K reaches a bitrate of 57 Mbps and a frame rate of 30 FPS. 4K DCI even passes 60 Mbps, which is pretty impressive.

Full HD sticks at 19 Mbps and the filming is overall below the big flagships listed above. I would say that for the its price of $300, the OnePlus one offers a pretty good camera, one on par with the HTC One M8 and Xperia Z1, second tier flagships. Having done with the camera, it’s time to analyze performance. We reached a temperature of 43.1 degrees Celsius after playing 15 minutes of Riptide GP2 and this model doesn’t have problems with overheating, I’ll give you that much, in spite of the relatively high temperature. 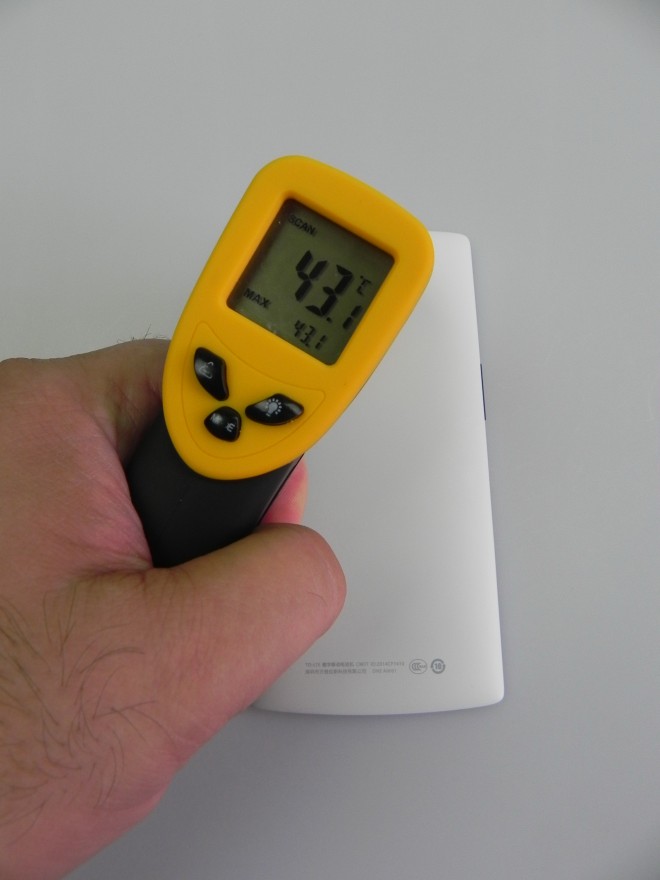 As far as the web browser is concerned, we didn’t get a stock browser preinstalled, so I used Chrome for the tests. It’s reasonably fast, I’ll give it that much and this way we also tested the virtual keyboard available, that’s filled with interesting settings and options, but most of them are in Chinese sadly. At least, the keyboard is well spaced. And now let’s see the benchmarks, as I compared this unit to all the big 2014 flagships.

In Quadrant we reached:

Overall, OnePlus One wins about 80 or 90% of its battles with these models, so it’s certainly a powerful device. Moving on to telephony features, we get good signal, excellent sound quality and a loud earpiece. The OS here is CyanogenMod 11S, on top of Android 4.4.2. It’s a custom ROM based on AOSP and it’s more customizable than many ROMs, plus it also has a ton of stock options and UI pieces. The capacitive keys can be deactivated and you can use onscreen keys in their stead. 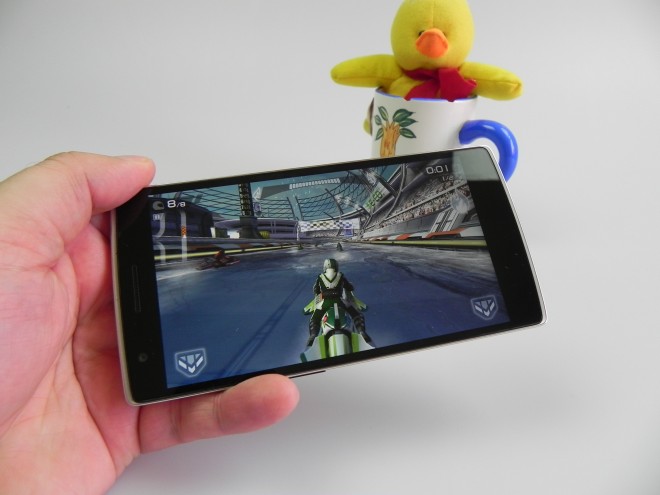 There are also gestures you can performed on the locked screen, like a V to activate the flashlight, an O to trigger the camera and double tap to simply activate the screen. Icons are square and the dock is customizable, even the app shortcut. Widgets are triggered by tapping and holding the screen and the notification area is pretty much stock material, plus a new design for icons.

Multitasking is done by holding the menu button and it includes a kill all button. There’s very much theme customizability and we get packs, styles, icons, fonts, lockscreen, wallpaper, boot animation, basically everything can be customized on CyanogenMod, even the Sound Pack. There are also advanced security features, like Privacy Guard or Whisper Push, that encrypts your texts.

The settings area allows you to assign new actions to button presses in various patterns, modify the status bar and what it shows, activate Quiet Hours and more. And now let’s see the Pros and Cons of this smartphone.