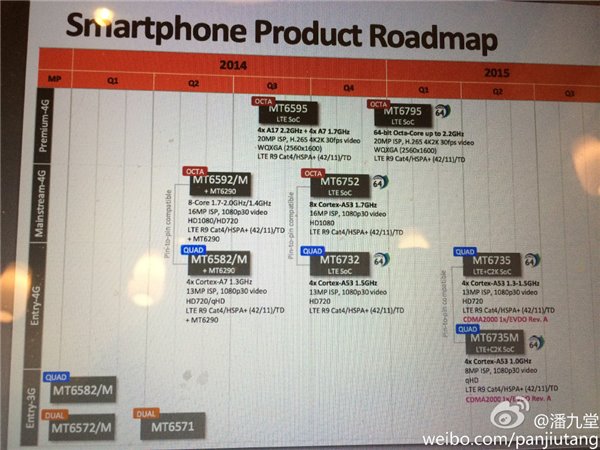 MediaTek’s roadmap for the future quarters has been published and we get to see what chips they have prepared for 2015 and the end of the current year. The new models include 64 bit units, octa core models and more, some with support for Android L and 4G LTE.

MediaTek has recently won VIA’s CDMA patents and intends to put them to good use. The MediaTek MT6735 applies that and this chip is meant to debut in Q2 next year with 4G LTE compatibility, 64 bit support and Android L support. This one is a quad core Cortex A53 CPU, clocked at up to 1.5 GHz and supporting a 13 megapixel camera. There’s also a special MT6735M version, with a clock rate of just 1 GHz and support for a lower resolution and 8 MP camera.

There’s also the interesting MT6595 chipset included in the roadmap, an octa core chip that will launch in Q3, with LTE. It will support 20 MP cameras and include 4 Cortex A17 cores and 4 Cortex A7 cores. Then there’s MediaTek 6795, an octa core 64 bit unit, also with 20 MP cam support and coming in early 2015. Expect to see these chips on many handsets over the next year or so.