The upcoming Pantech Magnus for AT&T, also known under the codename Batsu has just had its press shot leaked. Also going under the codename P9090, this phone hit the web in picture form courtesy of @evleaks. They’re the same reliable source that leaked a bunch of Windows Phone devices before they were announced. 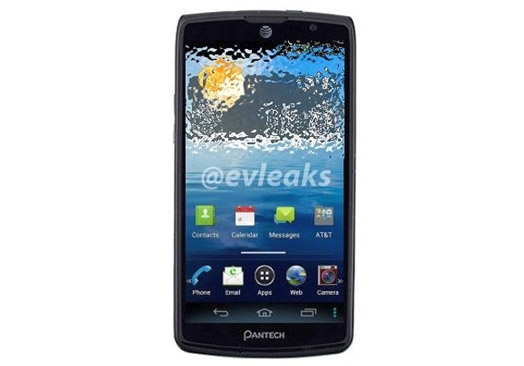 Pantech Magnus is said to run Android 4.0 ICS, using a Qualcomm Snapdragon S4 MSM8960 dual core chipset. Specs should also include LTE, NFC and “other usual features” for mid to high end Android phones. WiFi, Bluetooth, GPS, the usual sensors and cameras are also here. The launch date is unknown for now, but @evleaks intentionally blurred the calendar widget, so we can’t see the hints regarding the launch date.

Speculations say we may actually see this model launched with Jelly Bean and it should also have 1 GB of RAM and 16 GB of storage. Previous benchmarks showed us that the Magnus has a 4.3 inch 720p HD screen and an 8 megapixel camera with 1080p video capture. Pantech seems quite a big partner for AT&T, since recently they launched the Pantech Flex model and now they’re preparing this for debut.