It seems there’s a discrimination going on between the iPhone and Android apps these days. The very same apps tend to look better on the Apple platform, than on Google’s. Take Facebook for example and its great iPhone app, while the Android one doesn’t quite shine. This was also the case of the Android PayPal application, that’s now reached version 2.0. 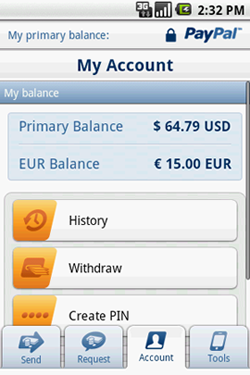 With the new version, the PayPal software on Android handsets is up to speed with the iPhone one and brings a couple of new features in the mix. Aside from the classic improvements, the app also brings Bump support, a feature allowing users to swap contact info, plus Split the Check, a function that divides the check between people eating at the restaurant, when one of them is paying with his credit card.

Later on, Split the Check will let everyone know what their share of the pay is.