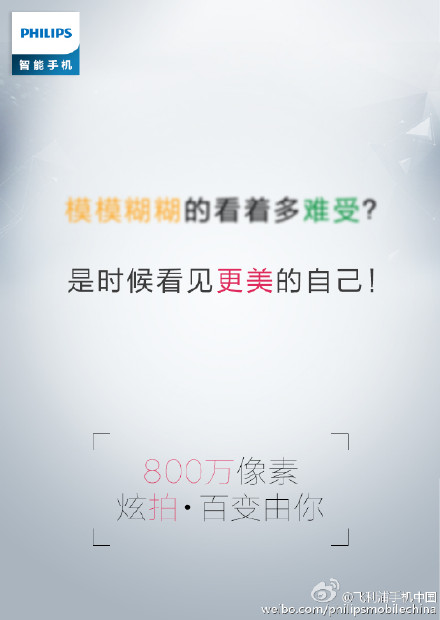 Philips wants a piece of the selfie pie, so it’s prepping a new handset with an 8 megapixel front camera. Dubbed Philips S396, the newcomer hasn’t been pictured just yet, but only teased.

We’re dealing with a model that’s meant for the Chinese market and the teaser above has been unveiled via Weibo. It will feature Android 5.0 Lollipop as the OS and a quad core 1.5 GHz processor, as well as a 5 inch 1280 x 720 pixel display. The back camera has the same resolution as the front one, 8 megapixels, which is not that impressive, considering other companies use 13 MP front cameras.

There’s also LTE on board, 1 GB of RAM and 8 GB of storage. Philips models usually have big batteries, so I expect that aspect to also be covered by the Philips S396. Also, I wouldn’t be surprised if special selfie software features were on board, like face shape tweaking, wrinkle removal and so on.