Since Android is the new trend when it comes to mobile operating systems, TechFaith Wireless and Qigi Future Technology have decided to offer the new Qigi i6 smartphone in 2 versions: a Windows Mobile and an Android one.

The name of the two handsets will be i6-Win and i6-Goal and they’ll feature 2.8 touch displays, quad-band GSM/GPRS/EDGE, WiFi, GPS and a 2 megapixel camera. 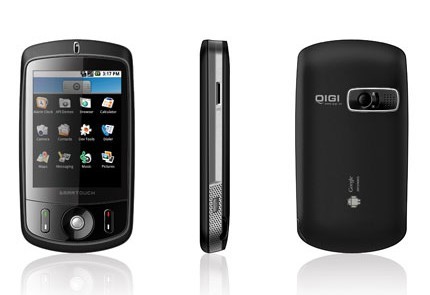 Aside from the different OS, the two handsets will be exactly the same, using Marvell’s PXA310 CPU (624 MHz) and supporting Bluetooth 2.0. On the specs list of Qigi i6 you’ll also find 128 MB of RAM, 256 MB flash storage, a five way controller and a microSD slot with support for cards of up to 4 GB.

The battery of the device provides 220 hours of standby functioning and 150-240 minutes of talk time. According to Qigi, the i6-Goal will be hitting the market first, but its price is yet unknown, as is the price of i6-Win.