RIM has just leaked a roadmap showing future BlackBerry cellphones, as you can see in the following image. The list includes pretty cool handsets, like the Bold 9800 Slider, the Bold Atlas, Bold 9900, 9870 Clamshell, a new Curve and a 9300/9330 Curve 3G. 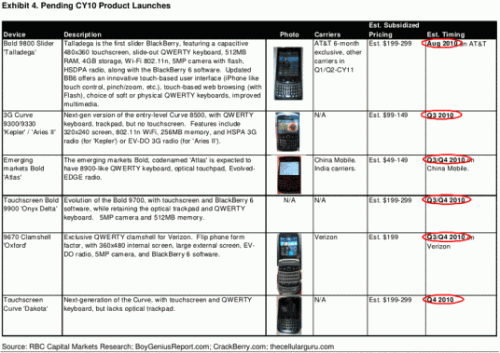 Bold 9800 Slider gets the Talladega codename, but it’s also known as the Torch and you must have spotted it a couple of times before, since the phone has leaked a bunch of times. It features a capacitive screen with a 480 x 360 pixel resolution, a slide-out QWERTY keyboard, a 5 megapixel camera with flash, 4GB of internal memory and 512MB RAM.

WiFi and 3G with HSDPA are also on board, plus the phone will run BlackBerry 6 OS and it’ll be released by AT&T in August for around $199-$299. Codenamed Kepler, BlackBerry 9300/9330 Curve 3G will hit the market in Q3, available in GSM and EV-DO flavour for $99-$149. A brand new BB Bold model is also coming, with the codename Atlas and meant for emerging markets.

The price for Atlas is $49-$149 and it’s due in China and India in Q3/Q4. BlackBerry Onyx Delta aka Bold 9900 also makes the list, as another touchscreen device, this time with a QWERTY keyboard. This mysterious handset will run BB OS 6, it’s due in Q3-Q4 and it’ll cost between $199 and $299. You should also expect a clamshell from RIM, with the codename Oxford, or BB 9870.

Oxford will be a Verizon exclusive, featuring an internal display with a 360 x 480 pixel resolution, an external screen, a 5 megapixel camera and BB OS 6.0. The device is slated for Q3/Q4 for around $199. Finally, the last on the list is BlackBerry Dakota/Magnum, a touchscreen and QWERTY-packing Curve with a Q4 release date and $199-$299 price range.

Of course, these details are prone to changes at any time, so don’t take them for granted.