If someone told you that the Moto Droid wins the sales duel with the first iPhone and Google Nexus One, would you believe this? From a certain point of view, this is very much real, if we take into account the analytics reporting published by Flurry recently. Have a look at the image below: 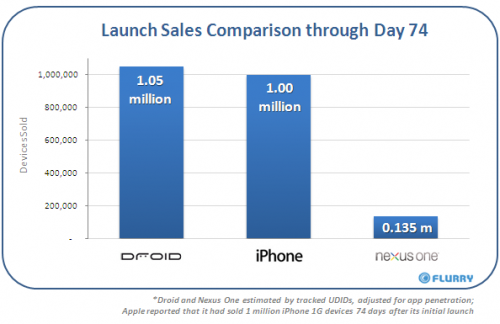 Flurry is able to detect and count devices like the Nexus One and Moto Droid, plus iPhone units, since applications that embbed Flurry have been downloaded on 80% of all iPhone OS and Android handsets. Thus, their estimates are pretty reliable.

If you’re wondering why the comparison of the smartphones mentioned above was made using the 74 days landmark, this has been chosen because the first iPhone took 74 days to sell 1 million  units. As a coincidence, today, March 19th is day 74 since the Nexus One was launched, on January 5.

It’s pretty clear that Motorola Droid tops the chart, with very impressive results, even surpassing the iPhone, wile the Nexus One sold 8 times less units than its two rivals. A possible explanation for this popularity is the fact that Droid was launched on November 5th, just as the holiday season started, the time of the year with the highest sales.

More theories and explanations can be found here.