Home Android Samsung Galaxy A3 (2016) Review: Small Multimedia Powerhouse and Quite the Looker 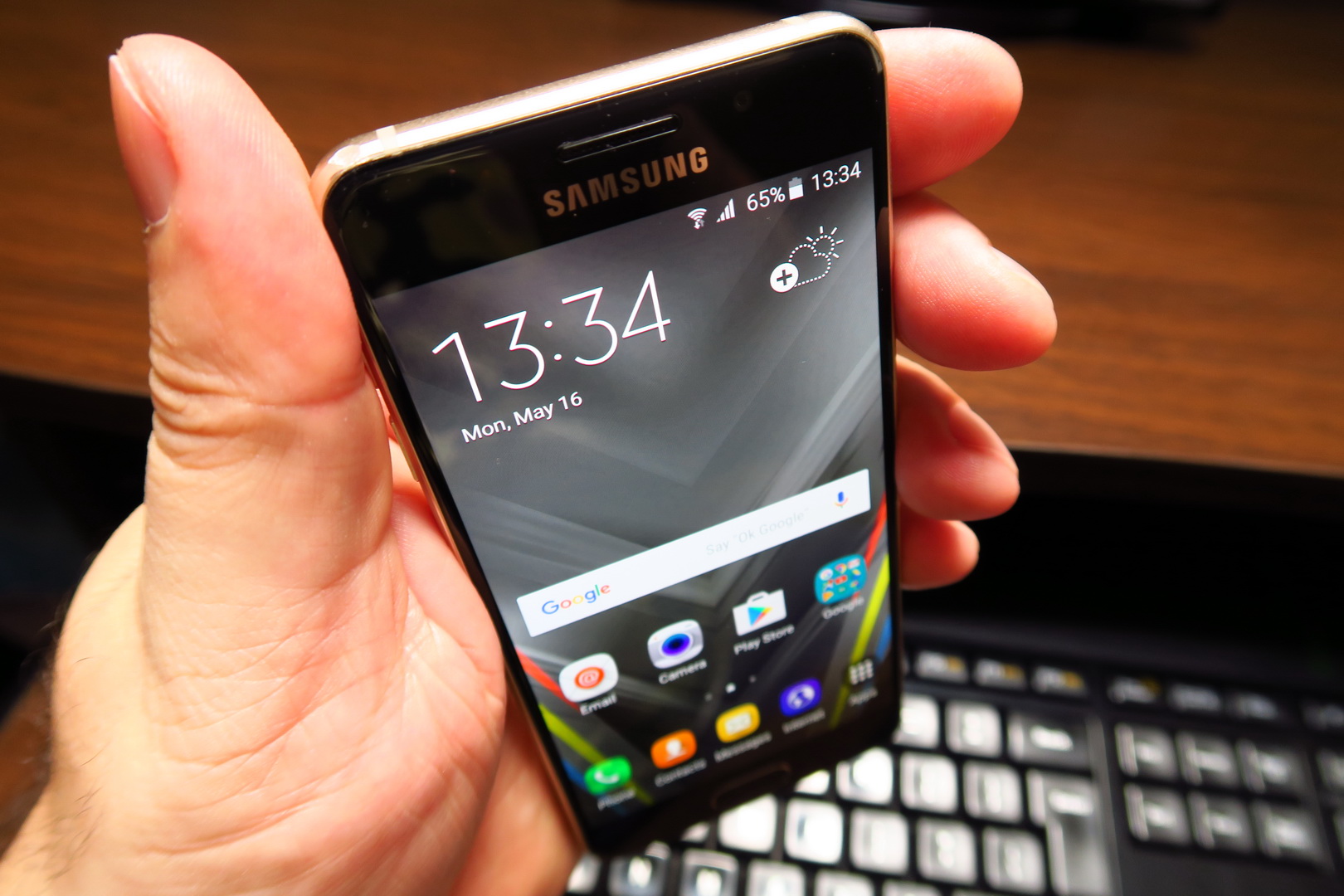 We’ve already reviewed this year the Samsung Galaxy A5 (2016) and Galaxy A7 (2016), so I guess it’s time to complete the circle and review Samsung Galaxy A3 (2016). The smallest of the bunch, this model comes with 4.7 inch screen and it’s possibly the best looking phone with a display below 5 inches. It was launched in December 2015 and it’s priced at $279 on Amazon. 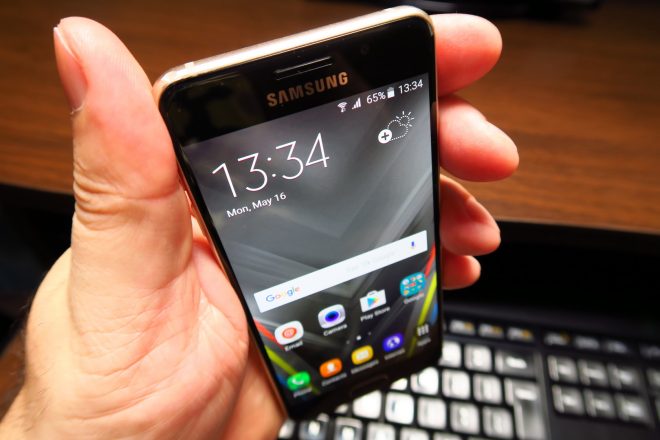 I wouldn’t exactly call this an entry level model, but rather a “low midranger”. The design is typical for a Samsung Galaxy A 2016 unit, with two glass panels and a sturdy metal frame between them. The Galaxy A3 had a metal unibody case, so opting for glass is certainly a change. The handset has a solid build, good grip and provides easy one hand usage. 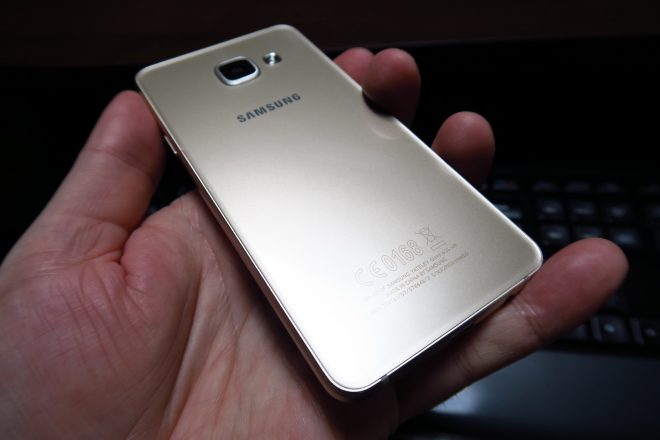 Galaxy A3 (2016) feels light and solid, but I noticed it’s prone to being dented on the metal frame area. Buttons are comfy and the device comes in black, white or gold. As far as the display is concerned, there’s a Super AMOLED panel here, with a 4.7 inch diagonal and a 720p resolution. Bezels are narrow and this is an upgrade for sure from the 4.5 inch 540 x 960 pixel screen of the predecessor.

The video app on board has no extra options and the viewing experience involved very vivid colors, deep black, good brightness, wide view angles and good contrast. Pixels are of the Pentile Matrix variety and the luxmeter showed us a value of 504 LUX, which is great and pretty much on par with the Galaxy A5 (2016) and A7 (2016). 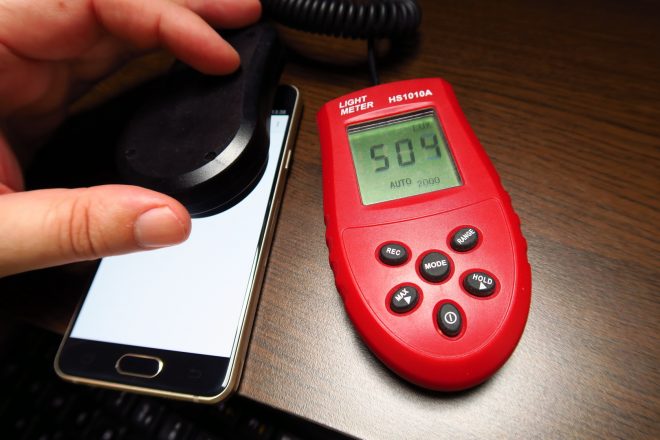 It beats the iPhone SE and Galaxy S5, plus the Huawei P8, which is not bad. Settings for the screen include brightness, font, Smart Stay, Screen Mode (Adaptive Display, AMOLED Cinema, AMOLED Photo and Basic). Overall, it’s a great screen, possibly the best below 5 inches nowadays. The hardware of the handset includes a 4 core Exynos 7580 CPU, clocked at 1.5 GHz, with a Mali T720 MP2 GPU.

It’s accompanied by 1.5 GB of RAM, 16 GB of storage, of which 10.8 GB are available to the user. The microSD card slot offers up to 128 GB of storage extra. Galaxy A3 (2016) is a fast device, with fluid UI and doesn’t suffer from lag. Apps start up fast and I tried them all and still no lag, so that’s excellent. Games run OK, including the likes of Vector 2 and Riptide GP2. 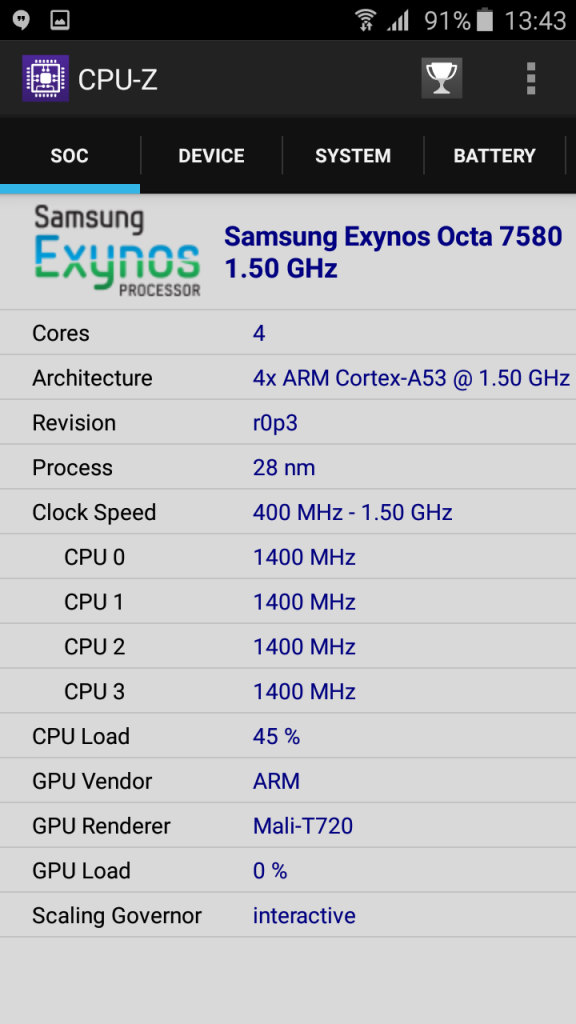 We also did benchmarks here, scoring above the Huawei Honor 7 in Quadrant and above the Xperia M5, too. In AnTuTu 6 we were above the Samsung Galaxy A7 (2016), which is excellent and even the 3D sub test was OK. In 3DMark things were more modest though and we got stuck between Lenovo Phab Plus and Huawei P8 Lite. Performance was good and we were also happy with the temperature, achieving 34.6 degrees Celsius after playing the game Riptide GP2 and 34.2 degrees after running GFXBench, so there’s no overheating. 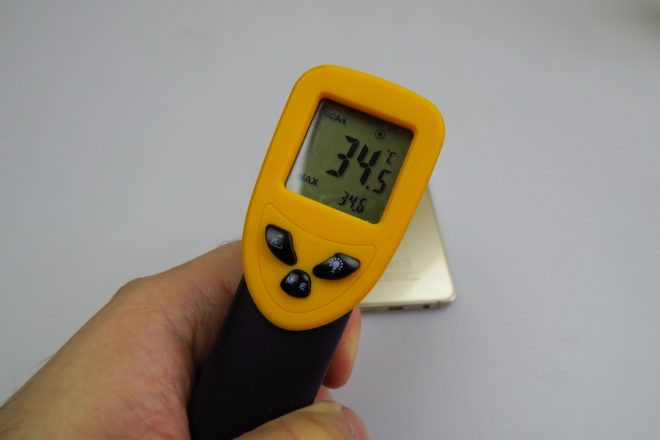 Time to talk about the battery, one of the shockingly good aspects of this compact toy. It’s a 2300 mAh unit, an increase from the predecessor’s 1900 mAh. On paper we’re promised 58 hours of audio playback and 14 hours of video play. Our own video playback test brought us 12 hours and 2 minutes of play, which is fantastic. It even surpasses the Galaxy Note 5, iPhone 6 and Galaxy S6 Edge+.

The PCMark test also delivered a great result of 8 hours and 45 minutes, surpassing the Galaxy A7 (2016) and Galaxy Note 5, plus Galaxy S7. Charging is done in 1 hour and 43 minutes, yet another good result. This makes the charging more effective than on the LG Nexus 5X and Galaxy S7. The battery settings include app optimization, Power Saving and Ultra Power Saving, with a black and white UI and only access to the basic features. 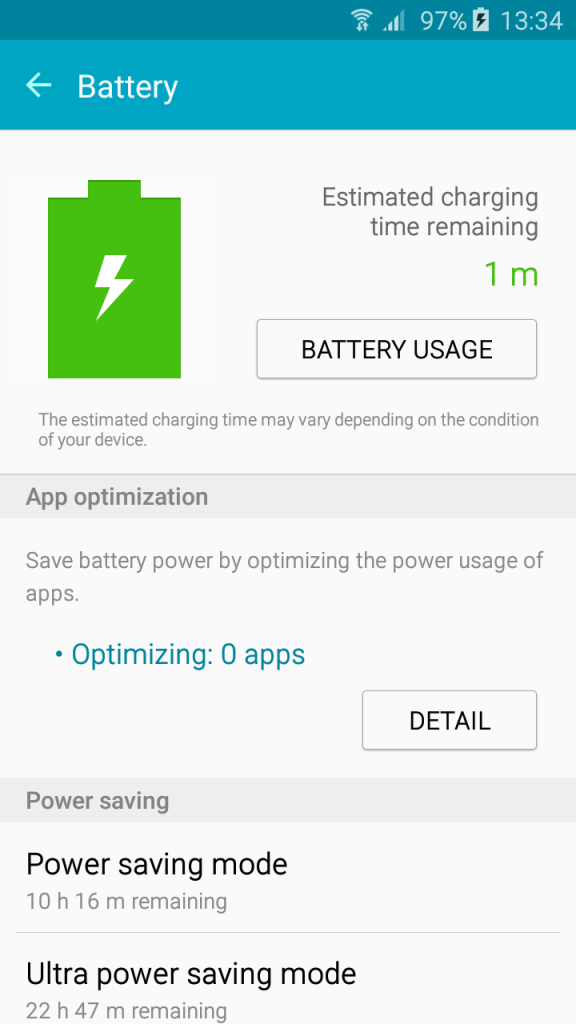 We move further from the great battery to the acoustic aspect, where we find a speaker at the bottom and the typical Samsung music player. Options include Play Speed, Music Auto Off and Smart Volume, as well as a capable equalizer. That one provides the usual Genre Settings and knobs for extra bass, treble, instrument and vocal, plus 7 custom channels to play with.

Then there’s 3D, bass, clarity, concert and Adapt Sound, plus Tube Amp, all of them adding to the experience. When listening to music using the speaker we registered a loud sound, clear songs and an OK bass and there was no distortion. Guitar was excellently rendered. We did a decibelmeter test and got up to 84.7 dBA at both the front and back. 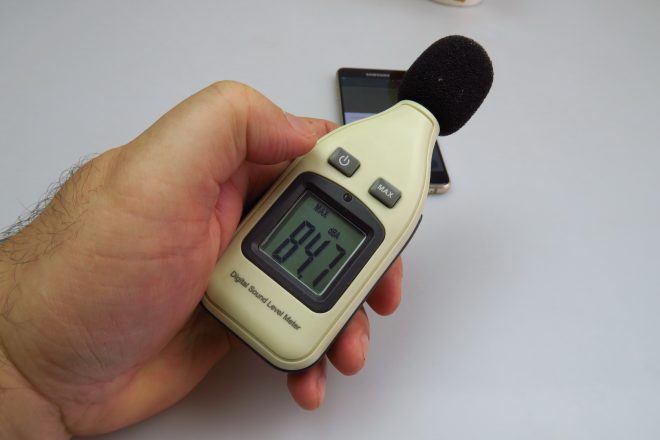 That’s exactly the same value as the Galaxy S7 and beats the Galaxy S7 Edge, a good result. Headphones are typical Sammy material, with a big remote, comfy buds and very good volume. Bass is perfect and isolation is also very good. The FM radio features a slow scanning feature. Now let’s talk about the camera!

There’s a 13 megapixel back shooter, with F/1.9 aperture and no OIS, unlike the other Galaxy A 2016 models. We do get a LED flash and upfront there’s a 5 MP cam with F/1.9 aperture. The Camera app starts up fast and we get a kind of slow  focus, but also fluid zoom and fast picture taking. Options include Effects, Timer, Flash and the resolution (13 MP in 4:3 or 9.6 MP in 16:9). 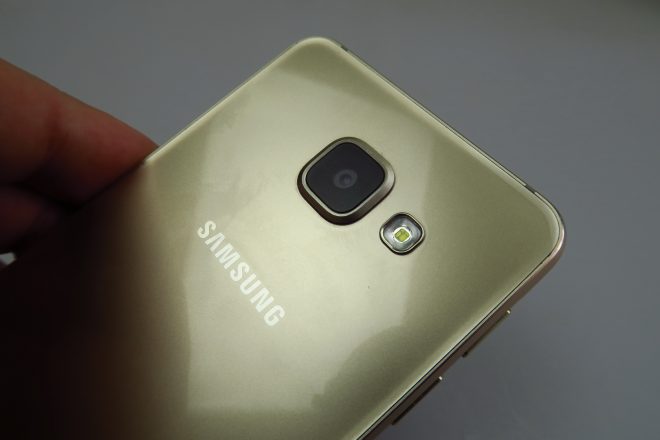 You can film in Full HD tops and there’s also the Quick Launch feature, involving the Home button. Photo capture modes include Auto, Pro (white balance, ISO, exposure, metering), Panorama, Continuous, HDR and Night. We took the day time gallery shots on a day with mixed sun and clouds and registered OK colors, some lack of clarity here and there and I found it hard to focus on closeups at times.

Still, the resulting ones were pretty good. HDR made instances like the clouds or church we photographed appear more close to ideal color calibration. Once we zoomed in, we came across OK details and the selfie was rather blurry and washed out. We had quite a few blurry shots, which to me was a letdown, after testing the other quality Samsung Galaxy A (2016) models . 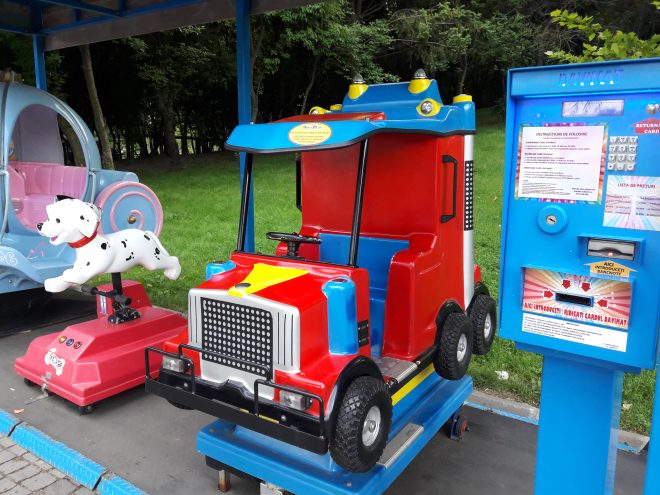 Panorama was OK, with a resolution of 7376 x 640 pixels, but I’ve seen much, much bigger. Details in landscape shots were not that good, but I noticed that there was a good quality in the pictures where you had a good focus. For example in the shade we caught “on film” those colorful toys pretty well. The grass we shot felt a bit artificial and not the proper green hue from real life.

I feel that these captures were not very convincing, even in spite of the low price of the device. Low light capture featured big halos and the photos taken without a flash weren’t exactly good, but those with were reasonable. Colors and clarity are quite decent with the flash on. The Night Mode also came in handy, but the results were a bit yellow-ish. 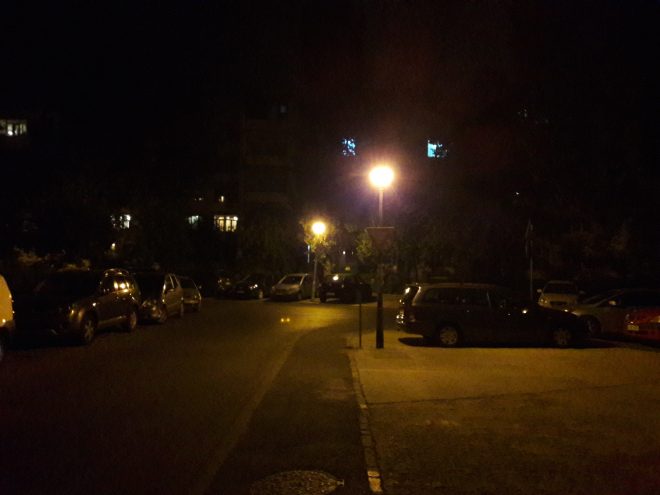 Closeups were of good quality at night. I know this is not the Galaxy A5 (2016), but I wanted a bit more from it. For example I find it below the quality of the Huawei Honor 4X, if you really want a comparison. Video capture is done in Full HD, in MP4 format and at 30 FPS, with a bitrate of 17 Mbps. The microphone was OK and we had good focus, plus good colors.

The image was shaky and details were lost when zooming in. Just like in the photo section, we had a few problems with the shade of green and how realistic it was in our captures, video this time. In low light conditions, the flash did its job quite fine. The key word here is “average”, since that is what defines the camera and it’s clearly below the Galaxy A5 (2016).

The web browser on the handset offered a mid level speed and modest benchmarks, while the virtual keyboard was comfy. On the connectivity front, this is a dual SIM model, with nano SIM card slots, but there’s also a single SIM version. 4G LTE is also available here, in TDD and FDD fashion and the connectivity options also include ANT+, microUSB 2.0, GPS, Glonass and there’s no MHL here.

WiFi 802.11 b/g/n is offered, as well as WiFi Direct, Bluetooth 4.1 and NFC. The Dialer offers access to Speed Dial functionality and the calls are loud and clear, plus the signal is good and the microphone offers good quality. Samsung Galaxy A3 (2016) runs Android 5.1.1 with TouchWiz on top, which includes Flipboard as one of the homescreens. 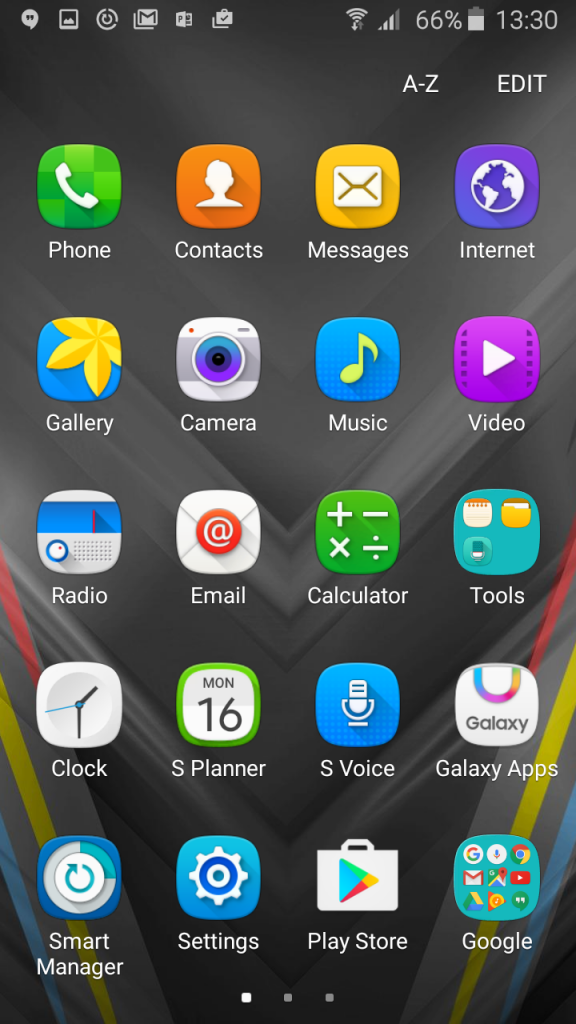 Multitasking is shown as a carousel and unlike other Galaxy A 2016 models, there’s no split screen mode here. The UI is colorful and glossy, unlike the one offered by Huawei for example. Keep the homescreen pressed and you’ll trigger widgets and themes, with both being based on a lot of transparency. The dropdown portion includes notifications and Quick Settings, the usual setup.

Settings on the device include a Quick Setting section at the top, showing the most accessed and useful options. This is the area where you’ll control motion and gesture interaction, Smart Alerts and the Easy Mode. I was shocked to see there’s no fingerprint scanner option and then I realized that the ring around the Home button was just a decoration and not a sign that we have a finger scanner. 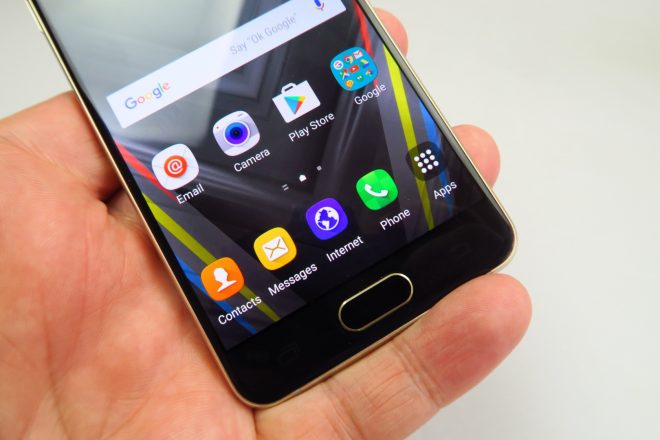 We then proceeded to count the preinstalled apps, reaching as high as 39, which is almost my definition of bloatware. Preinstalled apps include Word, Excel, PowerPoint and S Planner to name just a few. There’s also the Galaxy Apps store and a Smart Manager app. Now it’s time for the verdict.

Samsung Galaxy A3 (2016) remains a standout through design, battery, audio and display, so it’s a media phone first and foremost. It’s also a good looking, compact and youthful model. Everything works fine here, maybe except for the camera, that’s just average. In the end you may be better off adding a few extra dollar bills and getting the Galaxy A5 (2016), but only if you care more about the camera than having a compact phone. The updated price is here.