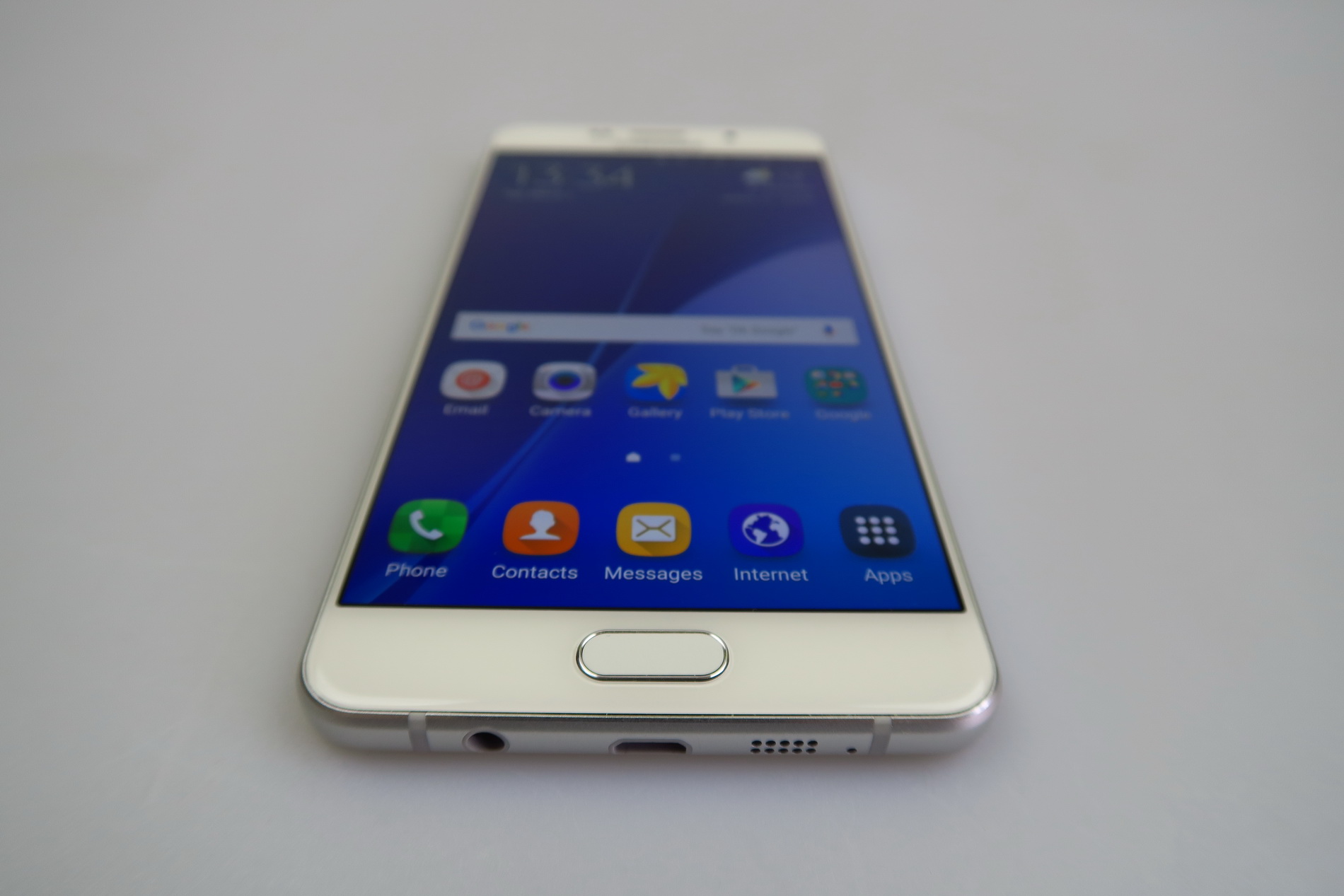 Samsung has been including elements from its premium products on its midrange series devices and that trend started months ago. Lately we’ve seen Galaxy J models get this treatment, but initially it was the Galaxy A units that got it. Samsung Galaxy A7 (2016) borrows a ton of elements from the Galaxy S6 and we checked it out in the review below. It’s priced at $520. 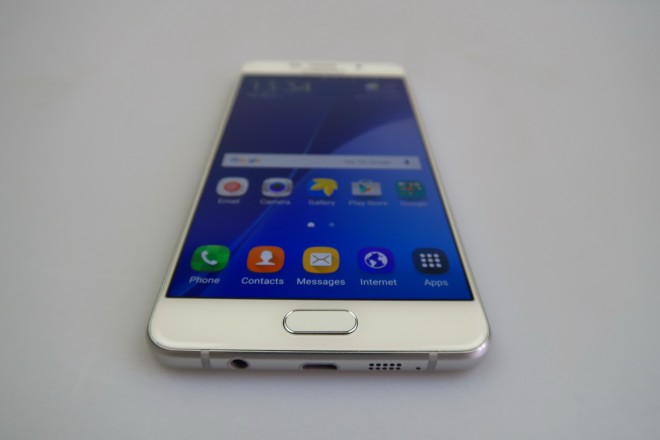 Launched in December 2015, the handset pertains to the Galaxy A series and while it’s a big upgrade to the Galaxy A7 from last year, said upgrade doesn’t exactly cover all the areas it could have. We do get some extra glass integrated within the case and it’s actually 2.5D Gorilla Glass 4 on both the back and front side.

This model has a metal frame and measures 7.3 mm in thickness, which is 1 mm thicker than the Samsung Galaxy A7 from before. It’s also a pretty big 31 grams heavier than its predecessor, but still manages to be slimmer than the Galaxy Note 5, albeit heavier. The smartphone has a premium build, comfy buttons and adopts clear Galaxy S6 influences. 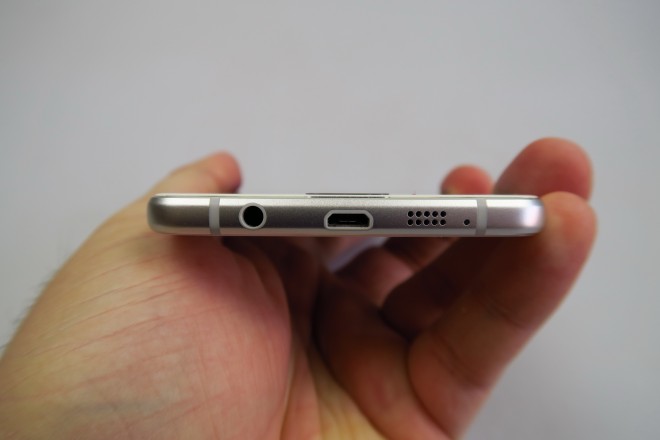 The finishing of the sides is a bit on the raw side, if you ask me. Galaxy A7 (2016) comes in gold, white and pink and it may be a solid and premium material affair, but it’s also pretty slippery. One advantage would be that it’s more compact than the iPhone 6s Plus. One hand use is totally out of the question. Moving on to hardware, the device packs a 5.5 inch Super AMOLED Full HD screen and relies on a video player with Pop up Play functionality and pinch to zoom, too.

The screen viewing experience involves very vivid colors, good brightness and deep blacks. I’d also say the contrast is good and view angles are wide, plus sunlight behavior is quite OK. This screen panel is not reflective and that’s also good news. Pixels are of the Pentile Matrix Diamond Shape kind and then we used the luxmeter to measure brightness and got up to 504 LUX, which is great. 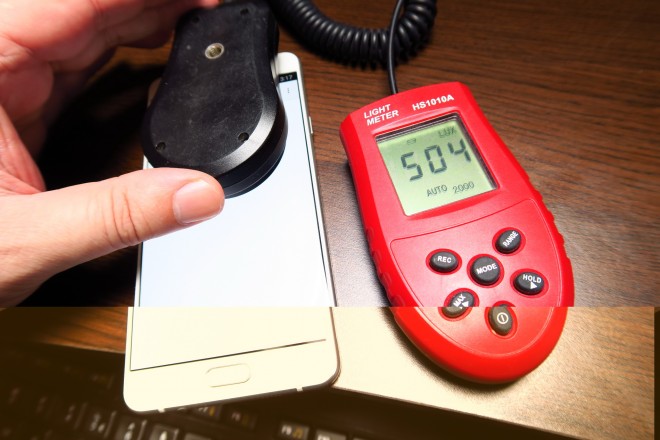 This means we surpassed the Samsung Galaxy S5 and the Galaxy S6 indoor test result. We’re still quite a bit below the iPhone 6 and 6s, plus the Galaxy S6 Edge+. Settings of the screen include One Hand Operation and Screen Mode (Adaptive, Photo, Basic, Cinema), the latter letting you pick more vivid or more realistic colors to show.

Overall this is a good display and now we move on to performance. Samsung Galaxy A7 (2016) features an octa core Qualcomm Snapdragon 615 processor, that’s kind of old, since it was launched in February 2014. The CPU is accompanied by 3 GB of RAM, 16 GB of storage, of which only 10.8 GB are available to the user. There’s also a microSD card slot, with support for up to 128 GB extra storage and the device has a pretty good performance and no lag during regular use. 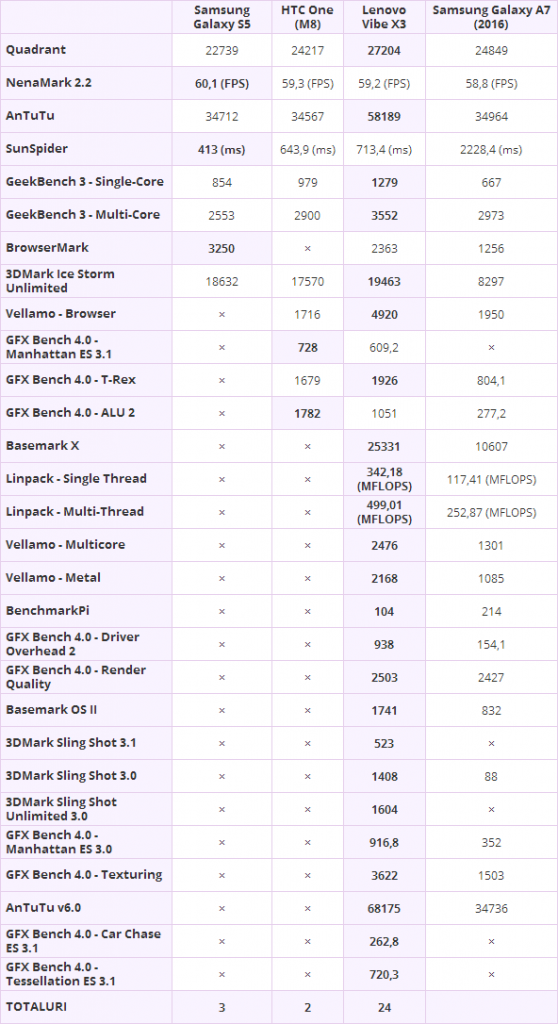 Benchmark results are rather modest, in the range of HTC One M8 and Galaxy S5, as well as ASUS ZenFone 2, but those have the advantage of being cheaper. The handset can run games just fine, such as Riptide GP2 for example and it doesn’t overheat, since after 15 minutes of playing that title we only got to 37.5 degrees Celsius. 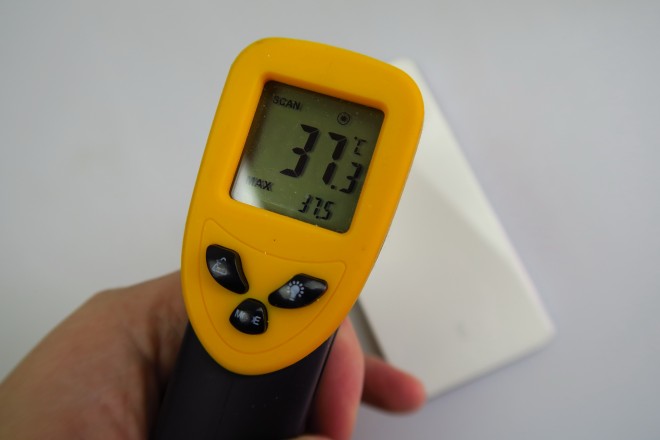 On the acoustics side, we get the good old Samsung music player, with Sound Alive option, that includes 3D, Bass, Clarity options, genre presets, treble and vocal knobs and more. The listening experience brought us good volume, loud and clear sound and a good bass. Keyboards were particularly well heard. The headphones bundled with this unit are standard ones and they were simply great, comfy and providing good isolation and very loud sound. The bass was also nice and this was pretty much the same pair we got with the Galaxy S5.

FM radio is also in the mix and then we did a decibelmeter test for the speaker and got to 84.5 dBA, which means we surpass the iPhone 6s Plus and Huawei Mate 8, which is not bad at all. Time to talk about the camera! 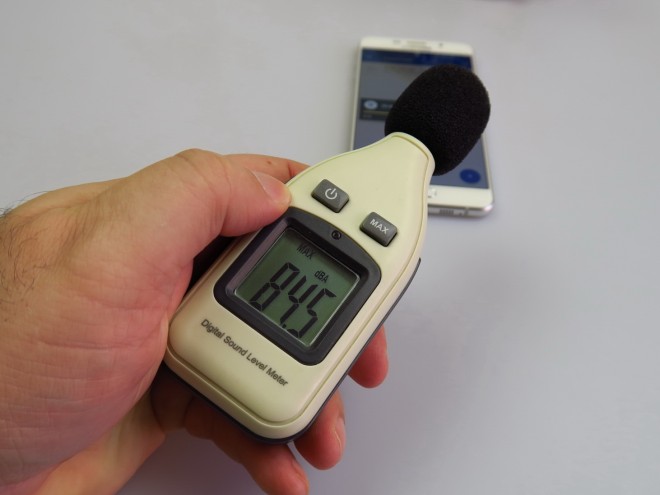 At the back there’s a 13 megapixel shooter, with F/1.9 aperture and optical image stabilization, as well as an LED flash and you can start said camera very fast by double tapping on the Home button. The selfie camera is a 5 MP F/1.9 unit and sadly the camera app doesn’t start very fast. Picture taking and focus are also kind of slow in my book. Sometimes the screen also registered a touch bug, not letting me press the shutter button and quickly going to zoom controls and staying stuck like that.

It could have been the fault of the test unit we had… Anyway, one of the capture modes that felt new here was the Anti Fog one, while the rest were familiar, including Pro, with the option to tweak white balance, ISO, exposure and metering. There’s no focus or shutter speed tweak, in case you were wondering. Now as far as the photo gallery goes, we took some shots inside a club, where the Galaxy S7 was being launched locally. 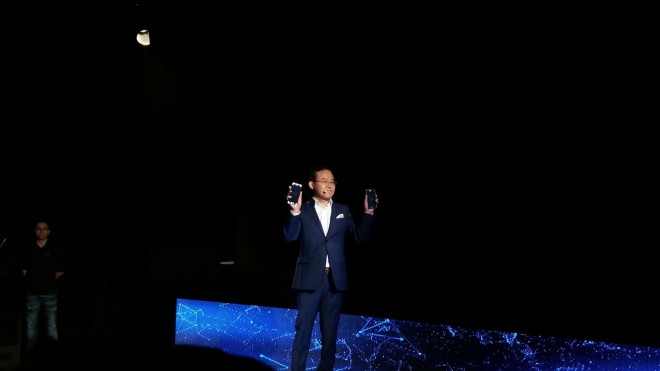 The blue lighting of the place kind of affected the capture. It also took some patience to focus properly and use the flash and while many of the captures were blurry in that situation, in the end we did get a few nicely zoomed in shots of the stage. In the meantime, street light shots were very yellow and not very clear.

During the day we had some pretty good selfies, great closeups of food and generally shots with nice texture. Day time capture was quite good and the panorama may have looked good, but the resolution was modest, at 7376 x 608 pixels. When zooming into shots we still kept quality and I liked the shades of blue more than anything in the captures. 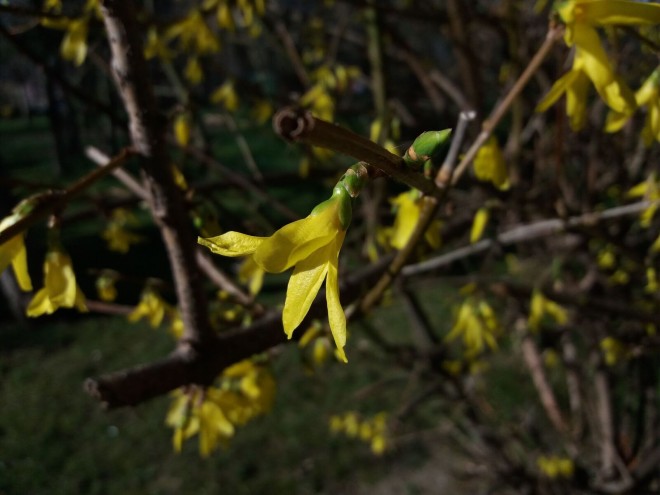 Video capture was done in Full HD, at 17 Mbps and 30 FPS. I noticed that the microphone handled the launch event in the club like a champ, but the image wasn’t on par. We had focus loss and optical image stabilization was rather modest. Focus loss happened in dark situations, but not when testing the OIS, at least. Clarity was good during the day time filming and colors were realistic, but the low light capture was simply bad.

I remember that the Samsung Galaxy A5 had fantastic video capture, even for its low price, so I expected more from this model. It’s clearly below any iPhone from the past years, but once again it beats the ASUS video capture and the Huawei P8 Lite for example in the same department. 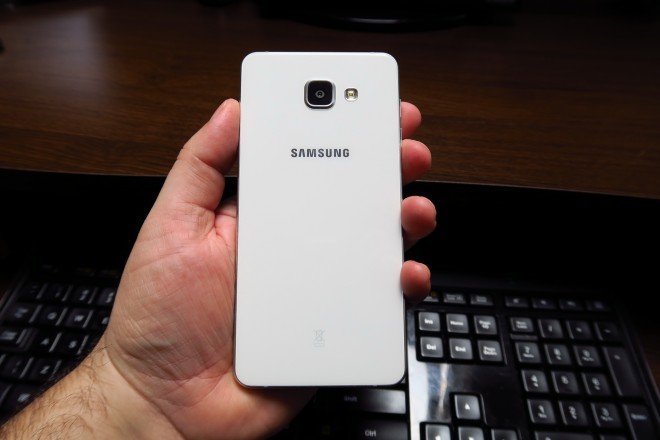 With the camera done, we talk about web browsing, with a stock browsed that has a modest speed and very poor benchmarks. The virtual keyboard is comfy and well spaced on the large screen. Connectivity-wise, there’s dual SIM action going on here, with nano SIM cards slots and 4G LTE Category 4 in the mix. We’ve got GPS, Glonass, NFC, Bluetooth 4.1, microUSB and WiFi direct thrown in for good measure.

There’s WiFi 802.11 a/b/g/n dual band and the calls we did offered a mid level volume, that wasn’t very impressive. Signal was good and clarity was OK, but not more than that. The speed test of the WiFi brought record breaking results, with 31 Mbps in download and 23 Mbps in upload. As far as the battery goes, there’s a 3300 mAh unit in the mix, with fast charging. 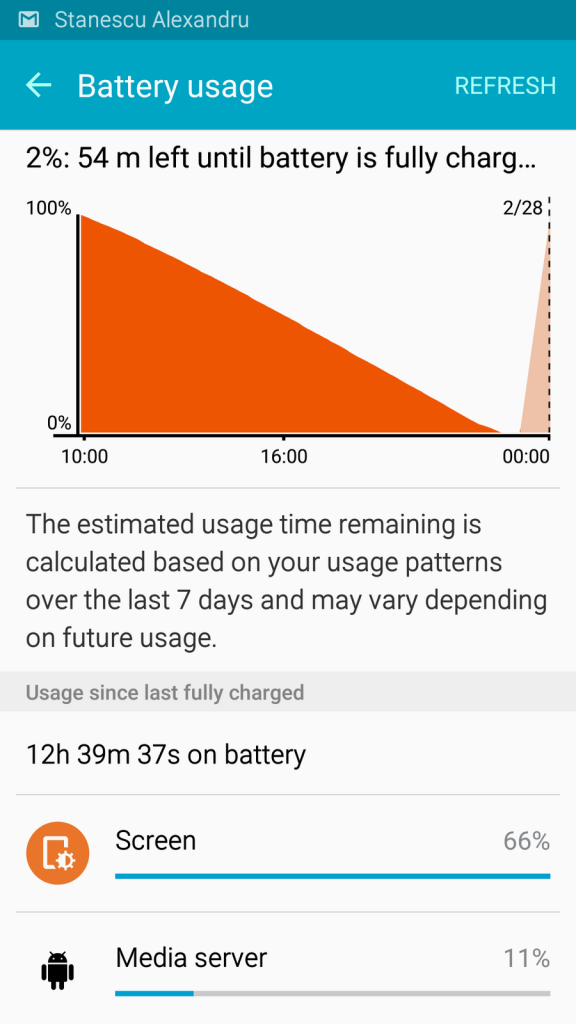 Charging requires 2 hours and 14 minutes, which is just OK, not more and obviously there are power saving features here, including Ultra Power Saving mode, with its monochrome approach and a ton of juice saved. Software-wise, we’re running Android 5.1.1 Lollipop, with TouchWiz on top, pretty much offering the same experience as the Samsung Galaxy S6. 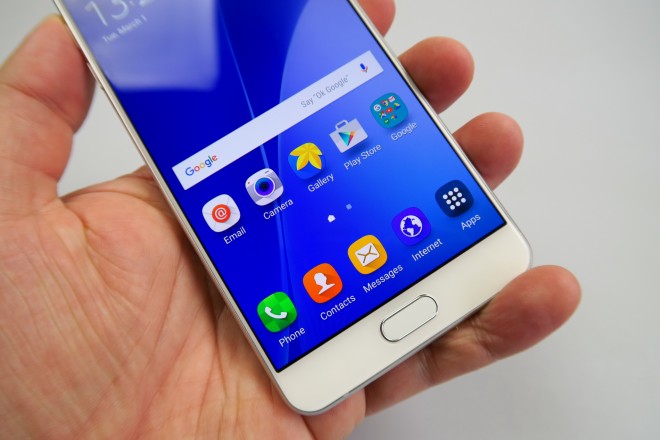 It’s a nice looking UI for sure, with sexy widgets and carousel multitasking is included. We also get split screen mode and the option to drag and drop text and pictures from one split part of the screen to another. The dropdown area is standard for a Samsung model, with Quick Connect, S Finder, brightness slider, notifications and horizontally scrolling Quick Settings.

Flipboard gets its own homescreen, but it remains optional. Settings are included as a huge list, which is easier to navigate thanks to a Favorites section at the top. We also tested the fingerprint scanner, which had a long setup and a fast unlock of the device. Plus, it can be used for we sign ins, into various services and sites. 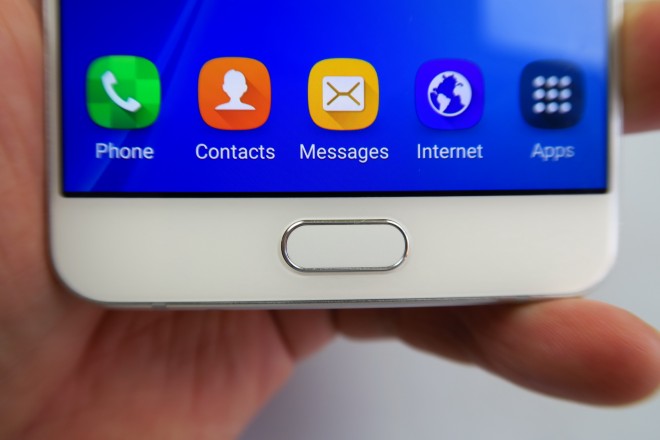 We then proceeded to count the apps, with 37 of them preinstalled here. 10 were from Gooogle, 5 from Microsoft (Office stuff) and then the usual S Health, S Planner and Smart Manager, so there’s no bloatware here. Now it’s time for the verdict!

I’d say that the price is probably the biggest turnoff here and a loss of $100 would be justified and it would make this model more of a hit. It functions as a Galaxy S6 replacement of sorts, but more modest in a few areas, minus the battery, where it’s actually fantastic. This is what every midranger should be, but in the end you’re better off buying the Lenovo Vibe X3, which surpasses the Samsung model in all aspects.

Once again, this is not a bad phone, just badly priced. You can find its latest price tag here.