After Google’s change of the Galaxy Nexus specs, that put the 32GB version out of the picture now there’s another story about the handset… It appears that the 32GB unit will actually make it, if we judge by the following picture, showing Verizon’s training document. However, you should notice that this document wrongly uses a Samsung Galaxy S II picture with Froyo as the Galaxy Nexus. 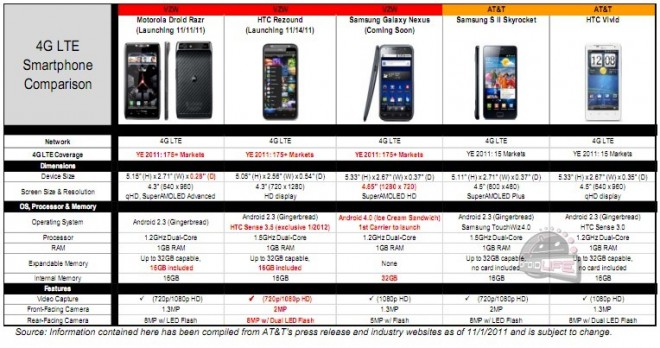 That’s very odd and makes me think that this is actually an old document from Verizon, from a month or two ago, when not everything was so clear about the new handset. The same leak shows a comparison between Verizon’s LTE phones with top features and AT&T’s LTE devices, the only two they have. Verizon’s lineup includes the Droid RAZR, HTC Rezound and Samsung Galaxy Nexus, with all the specs fitting what we already knew, aside from the 32GB bit.

So, it appears Google is listing the Samsung Galaxy Nexus as only sporting 16GB of internal memory, while Verizon shows us double the amount. Who are we to believe and what’s the deal with this confusion? It all started when we weren’t sure about the launch date of the smartphone and now this?!