Samsung Galaxy Nexus has been having a rough arrival, with tons of delays, launch date changes and now even the specs have changed… It appears that Google changed the spec sheet for the Samsung Galaxy Nexus on the official US website for the product. That means the 32GB version is gone, leaving us only with the 16GB Nexus. 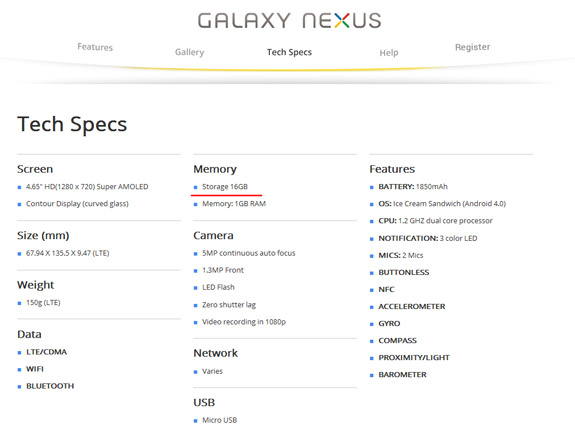 Google didn’t comment anything on that just yet, but I’m sure they will. On the US page the feature list for the handset mentions a LTE/CDMA model with no trace of HSPA+ support, although that one can be seen on the UK product page. Of course, this is the Verizon model, so that explains the connectivity and the 1850 mAh battery, as opposed to the GSM version with a 1750 mAh battery.

Initially, the US page showed listings for both the 16GB and 32GB units and now one of them is gone. It may be a simple omission, but from where I’m standing it doesn’t look good at all. What’s next, changing the CPU to a 1.5GHz single core unit?