We’ve been hearing for a while now that the Galaxy Nexus HSPA+ and the LTE versions will have some minor differences between them… And now there’s a picture to support the claim, that you can see below. Google offered everyone a 360 degree view of the handset, clarifying all the mystery around the LTE model. 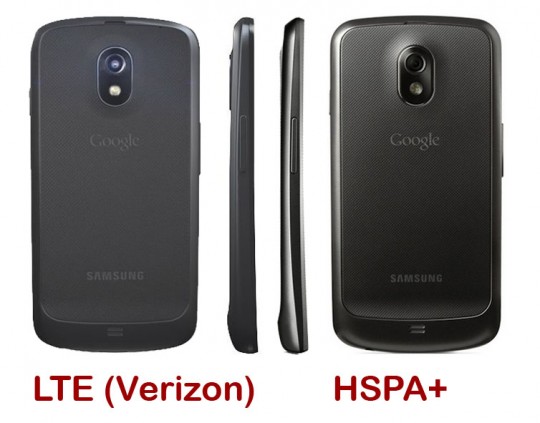 The LTE unit is 9.47mm thick, a bit more than the HSPA+ smartphone with a 8.9mm waistline. That gives extra room for the LTE chip and a battery that’s 100 mAh bigger. The model with last gen connectivity provides a 1750 mAh power source, while the 4G LTE phone comes with a 1850 mAh unit. Also, the LTE versions gets rid of the silver plastic ringing on the outside of the device and adopts a grey/black look.

The battery cover of the LTE Galaxy Nexus is also a different shade, but that’s not very clear to spot, considering the size of the press shot above. Well, this info may not mean much, but I wonder if there will be problems with cases fitted to a certain design of the new Nexus… but that’s probably not the case.