Samsung Galaxy Nexus visited us recently or a full review that you can see in the video below. As you must already know, this is the first Android 4.0 Ice Cream Sandwich smartphone and also one of the first 720p HD screen handsets on the market. The phone can be found on Amazon right now with a price tag of $149.99 in the Verizon version and the same carrier sells the device with contract for $299.99, as predicted before its debut. 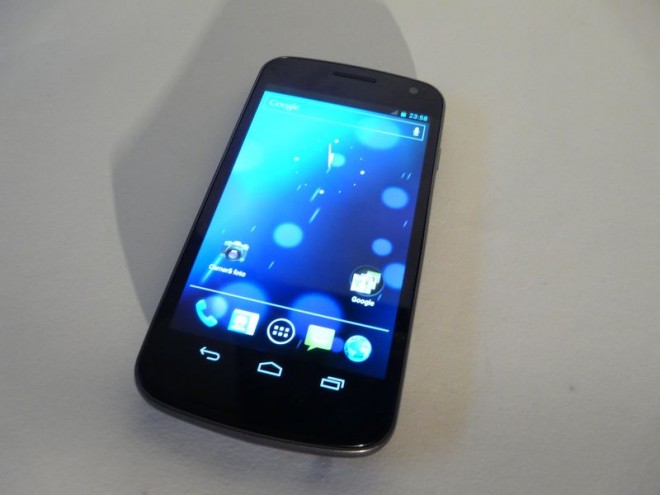 The smartphone comes with LTE connectivity, a brilliant 4.65 inch 720p HD display with Super AMOLED technology and relying on Pentile Matrix tech as well, that might bother some people who are into details. There’s no Gorilla Glass protection here, but there’s an alternative technology called Dragontrail if I’m not mistaking, that as good or even better than Gorilla Glass. The first Ice Cream Sandwich phone measures 8.9mm in thickness, weighs 135 grams, lacks a microSD card slot, but offers 16GB/32GB of internal memory instead and 1GB of RAM. It also lacks DLNA, but makes up with WiFi Direct connectivity.

Since I mentioned connectivity, the Galaxy Nexus provides HSDPA, WiFi, Bluetooth 3.0 and moving on to the serious hardware, we find the dual core 1.2 GHz TI OMAP 4460 processor with the PowerVRSGX540 GPU, that provides more than decent gaming. Other specs include the 5 megapixel camera with autofocus, LED flash, geotagging, face detection and 1080p 30 fps video capture. There’s also a front 1.3 megapixel camera for videocalling and the same cam helps with the facial recognition when unlocking the smartphone. 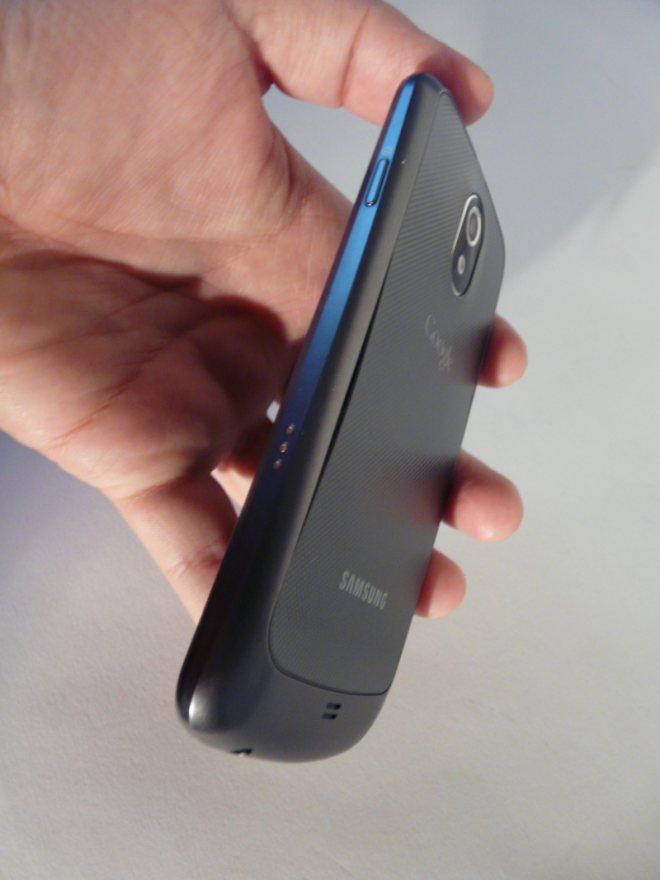 Samsung Galaxy Nexus also incorporates an accelerometer, gyroscope, compass, barometer, AGPS and a Li-Ion 1750 mAh battery that provides 8 hours of talk time and about a day of usage. And now, moving on to the software we find the already famous Android 4.0 Ice Cream Sandwich available here, bringing a pleasant new interface, NFC transfers via Android Beam and facial recognition unlock with the aid of the front camera, as demoed in the video review.

The new Android also sports resizable widgets, strong Google+ integration, roomy folders that are easy to create by simply dragging one app on top of another and an overall fluid experience. The multitasking is fantastic and using the rightmost virtual bottom in the lower part of the screen you’ll open a collection of recently used apps, that will be closed with a single swipe to the right. I’ve even had two HD FPS games open at the same time, together with a video and music and still the smartphone was acting nice, when it came to multitasking.

As far as multimedia goes, the audio volume could be higher and I was a bit disappointed by the speaker, but there’s already a software fix for that, it seems. The video playback looks great, .mkv HD video looks great on the beautiful display, that also makes good use of its resolution in the latest Gameloft and Glu Mobile titles. Every Google app has been revamped, starting with Gmail, that now has beautiful avatars and swiping between emails and continuing to the nifty calendar with its new widget, a new Google Maps with a couple of new features and a YouTube app that borrows some design traits from the new desktop version and from Google+. 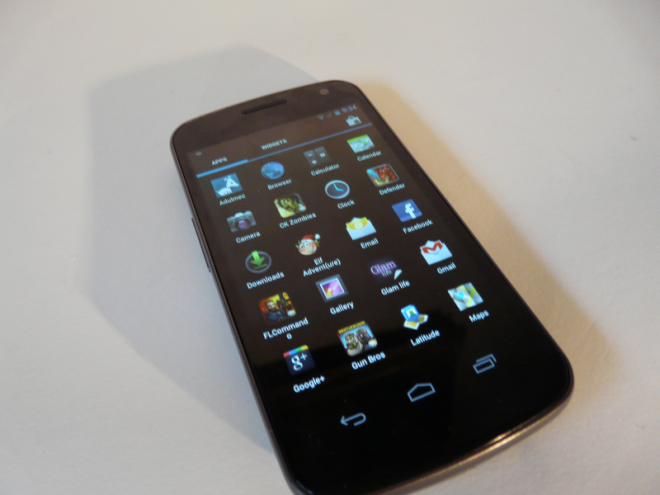 The camera experience was a bit underwhelming, especially if you rely on automatic settings. I’d recommend you go with manual settings and adjust the photo taking experience to your needs. What’s cool about the camera are the many effects and options in the video capture section. You can even add a moving background that includes a disco, effect, a sunset effect, a space station background and a couple of funny tweaks to the faces of the people you will catch on video. Too bad that the photo section doesn’t have that many effects and settings included…

Since we’ve starting mentioning flaws, this handset doesn’t come with FM radio, it’s a bit slippery so it might fall out of your hand and initially it was launched without Flash support, that came later on. Its weak speaker is another flaw, as well as the underpar camera, that has a reason for its weakness: not cannibalizing Samsung Galaxy S II sales. Also there’s no microSD card slot, seen as a big lack for many people. On the plus side, we have a fantastic UI, fantastic multitasking, great handset design, nifty LED notification, face unlocking, Android Beam, resizable widgets, a new browser that syncs with Chrome bookmarks and a great contact integration.

The avatars in the contact list are big and colourful and it’s very easy to find the people you’re looking for even if you’re using groups of contacts. All in all, this is the best Android smartphone you can find on the market right now and the current price is not that steep either. Till the Galaxy S III comes out there’s no better choice than this… provided that Verizon fixes its signal problems.