If you want to get a Samsung Galaxy Nexus unit, know that some of you will be able to do that as soon as November 16th, that’s 3 weeks away. This promise comes from UK retailer Phones 4U, but it may just be a promotional promise, so don’t get your hopes up. 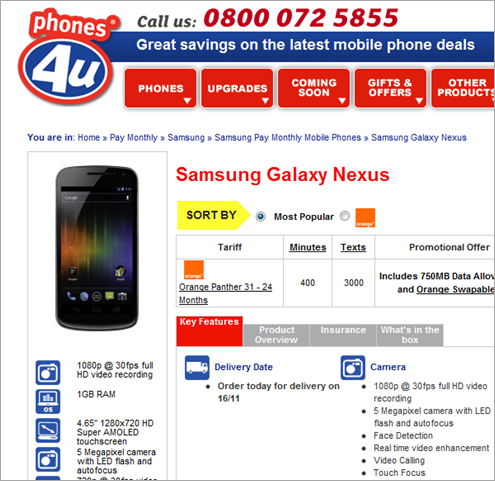 This HD display Android 4.0 handset has been included in many retailers’ portofolio, but only as a promise of “coming soon”. Most of the e-tailers published prices around $700 or $800, that seem huge, even for an unlocked LTE smartphone of the new generation. It’s strange that we’ve seen launch dates (fake or real) from all over the world, but the USA doesn’t seem to get one… and this is a product made by Google and Samsung we’re talking about!

I guess we’ll have to wait for the middle of November to learn the REAL price and launch date of the 1.2GHz dual core TI OMAP handset that inaugurated Android Ice Cream Sandwich. That’s about the same time frame for the Motorola Droid RAZR… which one will you choose?