A recently leak PR slide shows that Samsung Galaxy S 2 and the Galaxy Tab 2 slate will be introduced on February 13, one day before Mobile World Congress 2011 debuts in Barcelona. The handset mustn’t be confused with the Samsung Galaxy S 4G, recently announced by T-Mobile and bringing only HSPA+ as an upgrade. 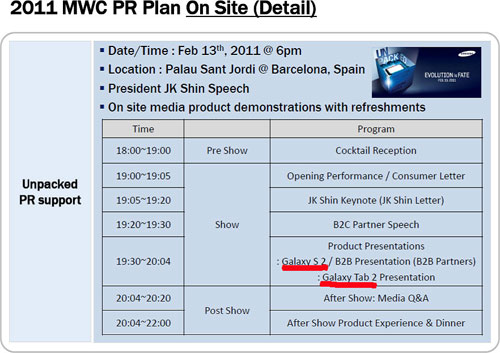 As we’ve just found out, the Galaxy S 2 will be a dual core smartphone that will switch the Super AMOLED display for a Super AMOLED+ one and it’ll maybe support 4G LTE connectivity. That can also be said about the Galaxy Tab 2, also dual core material, most likely with Android 3.0 Honeycomb on board, like the rival Motorola Xoom and LG G-Slate.