Samsung Galaxy S III, the most talked about phone of the first half of 2012 will be coming to USA and Canada next month, according to rumors. The launch of the quad core Exynos phone is supposed to go down on June 20th, if we’re to believe some sources speaking to The Verge. 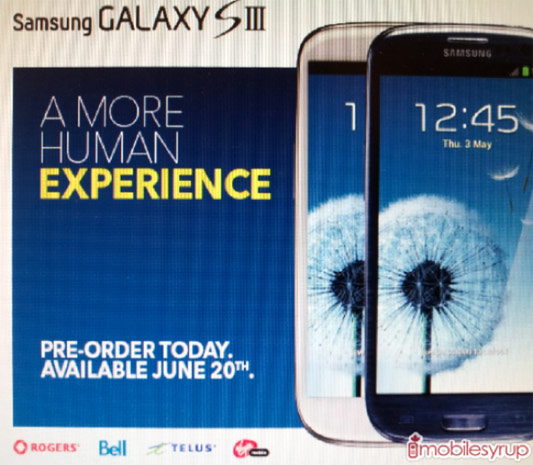 We remind you that the Galaxy S III hits Europe on May 29th and as far as North America goes, Samsung said that the phone will arrive in June. MobileSyrup recently posted a screenshot showing a June 20th release of the handset, with availability on carriers such as Rogers, Bell, Telus and Virgin Mobile in Canada. The site says that it was asked to take down the screenshot, but the image still remains online, courtesy of some other sites that snapped a pic of it.

TMoNews is also reporting that it received a tip concerning the launch of the Galaxy S III on T-Mobile. The metallic blue version is scheduled to arrive on June 20th as well, according to the site. The white version will only debut on July 11th, in the 16GB storage amount alone. On the same people on T-Mobile will also get the Galaxy Note and two new MyTouch devices manufactured by Huawei, so it will be a full summer for T-Mobile.