The Samsung Galaxy S4 Mini is the mini version of the Galaxy S4, a handset that was announced back in May and launched in July. It was priced around $400 last I heard and it’s basically a smaller Galaxy S4. In the following lines we’ll see if it’s worth your money or not. 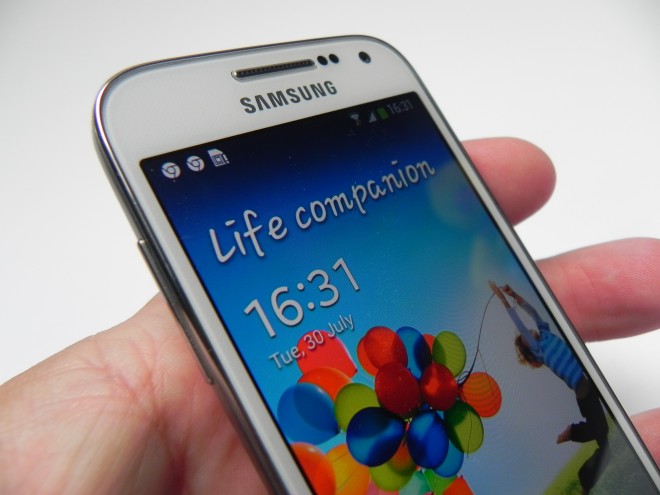 As far as design goes, we get pretty much the same experience as the one of the Galaxy S4, which means a glossy plasticky case, but also straighter edges compared to the S III. The handset sits very well in the user’s hand and offers excellent one hand usability. There’s a small screen bezel here and the thickness of the device is 8.9 mm.

Samsung Galaxy S4 Mini weighs 107 grams and it has no notification RGB light, in case you’re looking for that. It feels light and thin and luckily it’s less slippery than the S4, simply because it’s smaller and easier to grasp. As far as hardware is concerned, we get here a Super AMOLED 4.3 inch screen with a 540 x 960 pixel resolution and Gorilla Glass protection, two microphones, a microSD card slot and 8 GB of storage, of which 5 GB are available to the user. 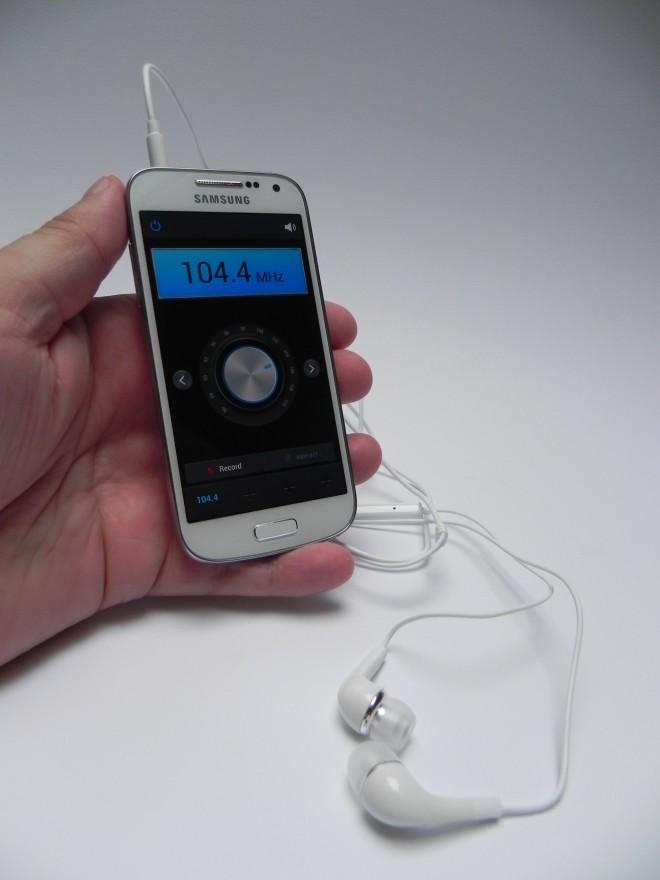 We also get 1.5 GB of RAM, quad band GSM/GPRS/EDGE connectivity, LTE and a dual core Snapdragon 400 1.7 GHz processor, as well as an Adreno 305 GPU. There’s HSDPA 42 Mbps connectivity, WiFi dual band, NFC, DLNA and Bluetooth 4.0. At the back we’ve got an 8 megapixel camera with LED flash, while upfront there’s a 1.9 megapixel shooter.

The phone also sports the usual accelerometer, gyroscope, compass, stereo FM radio, GPS and Glonass. The microUSB 2.0 port doesn’t sport MHL and as far as the battery is concerned, this 1900 mAh unit charged in 2 hours and 20 minutes and helped us achieve 11 hours of YouTube playback with 50% brightness, that’s huge in my book. 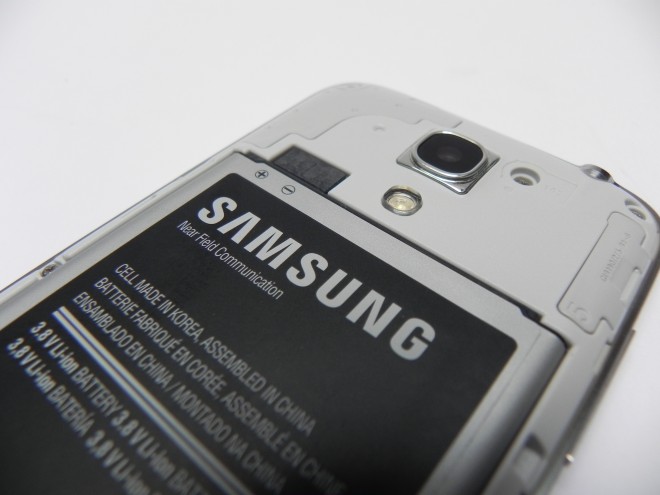 On the audio side, we’ve got a very loud experience, FLAC support and the same nifty music player with tons of options from the Galaxy S4. We’ve got a complex EQ, Smart Sound that equalizes volume between tunes and Adapt Sound for better calibration. The headphones are comfy and loud and overall the volume is  high, the bass is good and the voice is clear, although you can sometimes feel a slight distortion at maximum volume.

Moving on to the screen, this display allows us to achieve 215 lux units of brightness, which is less than impressive nowadays, especially compared to a 400 lux Nexus 5 or 500 lux HTC One. The screen has a variety of setups available in the Settings area, with a Dynamic, Standard, Professional Photo and Movie Mode. The latter produces the most accurate and realistic colors of all the other options. 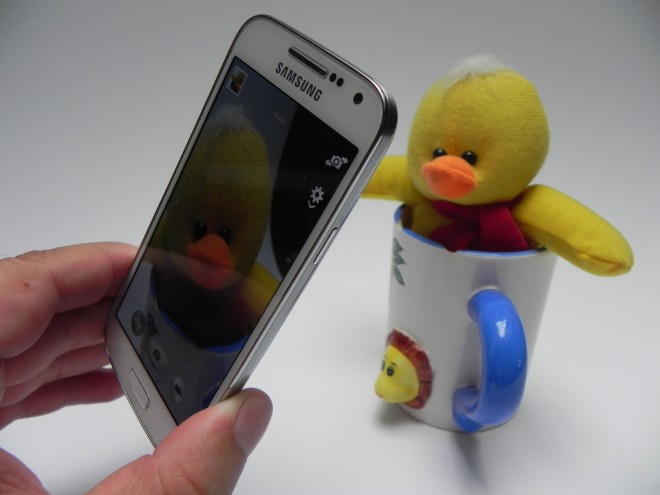 This screen offers low screen ghosting, 5000:1 contrast, decent view angles  and an RGB Matrix that’s not pentile. The colors look very good and sunlight behaviour is pretty good. We get a variety of codec and format support here, including DivX, Ac3 and more. Moving on to the camera, the 8 megapixel shooter here offers the same UI as on the Galaxy S4.

We get the effects at the bottom, some options to the top and modes on the side. Obviously some of the cool modes of the flagship are lacking and as far as actual picture taking is concerned, we images are slightly oversaturated. The pictures do look decent in daylight and have a good clarity and brightness. Video capture is done in Full HD at 30 FPS with a bitrate of 17.1 Mbps and audio capture si 128 Kbps bitrate and 48 KHz sampling rate. 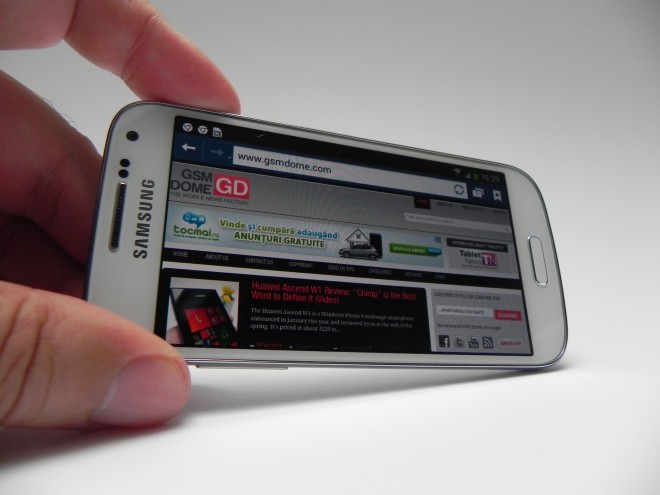 Indoors pictures get noisy and I noticed that there’s no dual shot here, unlike the S4. The panorama quality is OK and overall the camera is below the one of the Galaxy S III even and certainly inferior to the HTC One Mini. As far as benchmarks go, this model scores 7127 points in Quadrant, 4359 in AnTuTu and 5721 in 3DMark, beating the One Mini in the first and last of them, while the AnTuTu scored felt buggy, to be honest.

The device reaches 35 degrees Celsius after watching a Full HD movie, so it doesn’t get very hot. The call quality is top notch and so is reception here, plus we get smart dial and native video calls in the phone app. The settings area features some motions and gestures, plus the Smart Screen feature and Voice Control. 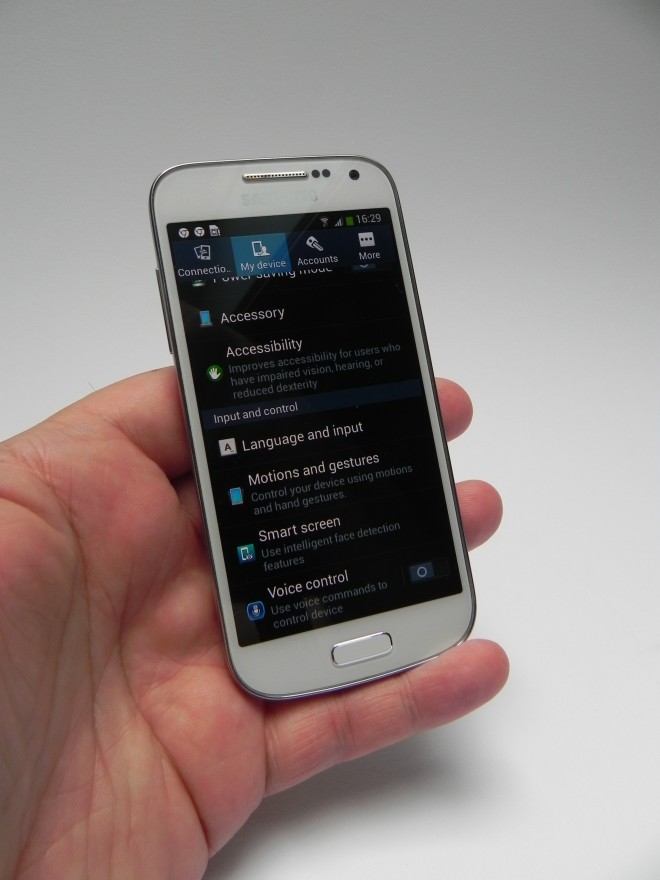 The OS here is Android 4.2.2 and the preinstalled apps include Samsung regulars like S Planner, Samsung Hub, WatchOn, S Translator, Flipboard, TripAdvisor and more. No wonder so much storage is already used up when you buy the device, with so many apps preinstalled on it. Some of the features lacking here but present on the S4 include Air View, Air Gesture, Multi Window, Smart Scroll and Smart Pause. Also, there’s no trace of S Health, neither on the device or on the Samsung Apps store, which is strange.

And now for the conclusions… Here are the Pros of buying this device:

We give this handset a 9 for design, a 7.5 for hardware and an 8 for OS and UI, for a final grade of 8.16 out of 10, of which we deduct a point for the exaggerated price and we get 7.16 out of 10. In most places this device is still priced higher than the Galaxy S III and it’s clearly not worth it.