Samsung is gearing up for MWC 2013 with quite a bunch of products, including the Galaxy Xcover 2, shown below. They are also preparing several other bigshots, like the Galaxy Note 8, Galaxy Tab 3 and some people say we may even get a glimpse of the 8 core Galaxy S IV in Barcelona. 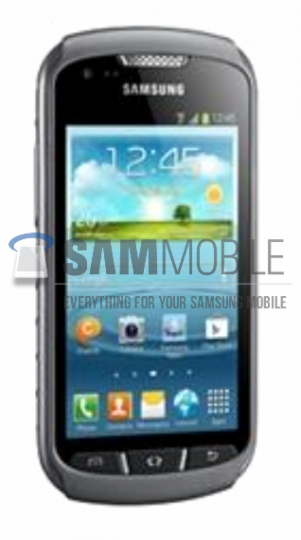 The Galaxy Xcover 2 will be a resilient device most likely, just like its predecessor. Rumors come from SamMobile, that’s the best source of Samsung-related info these days. They also posted a bunch of specs for the Xcover 2, including a 4 inch TFT 800 x 480 pixel display, a 1700 mAh battery and a 5 megapixel rear camera. There’s also 4 GB of storage and the option to expand via microSD card slot. The Xcover is expected to be resilient to water, dust and rougher contact.

The handset will run either Android 4.1 or Android 4.2 and sadly we have no details about its CPU choice or the quantity of RAM on board. MWC 2013 is only a month a few days away and we’ll be right there reporting for you all. Hopefully, the price will be reasonable for the Xcover 2.