Samsung just announced the Omnia M Windows Phone 7.5 model, that features a 4 inch Super AMOLED display. Although Samsung has a huge amount of Android devices in its portofolio, it hasn’t been that generous when it comes to Windows Phone, since it only has the Omnia 7, Omnia W and Omnia M models in Europe and Asia. There was some other unit out there, but still the WP offer from Sammy is thin. 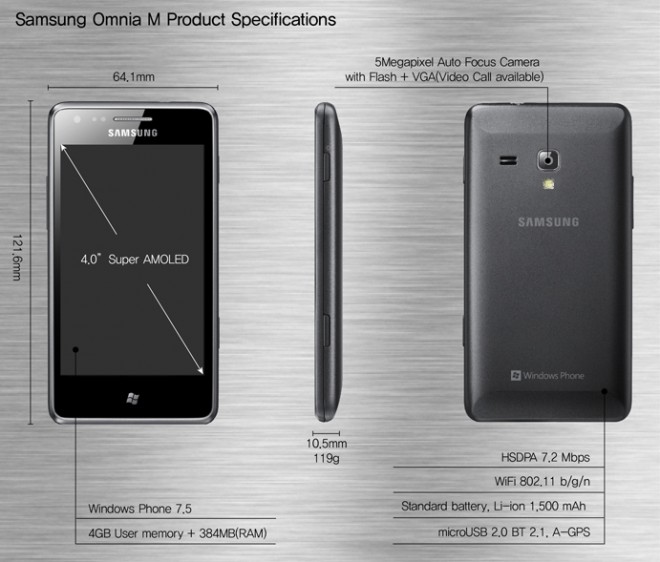 As far as the newcomer Omnia M goes, the device supports a 480 x 800 pixel resolution, 1GHz single core processor, 384 MB RAM, 4GB of storage and a 5 megapixel camera with HD capture. The specs are pretty “2010” to me, unless you want a lower end smartphone. There’s also 0.3MP camera upfront, 3G and WiFi on board. Speculations say this model will cost less than 200 euros and it’s expected in Europe first and then other markets.

It also has a 1500 mAh battery and a 10.5mm waistline. Samsung Omnia M weighs 119 grams and you can actually consider it a dumbed down Samsung Omnia W if you want. I wonder if this model is WP Tango material, or simply another Mango unit with mediocre specs. Will that RAM be enough for it?! This unit would only make sense as a second phone for someone who already owns an Android superphone.