Showcased at MWC 2012, the Sony Xperia P, Xperia U and Xperia S have now arrived in the USA, after already being available in Europe for a while now. Distributor Brightstar is the one taking care of the newcomers, revealing that sometime this summer, they would introduce the trio in the States. 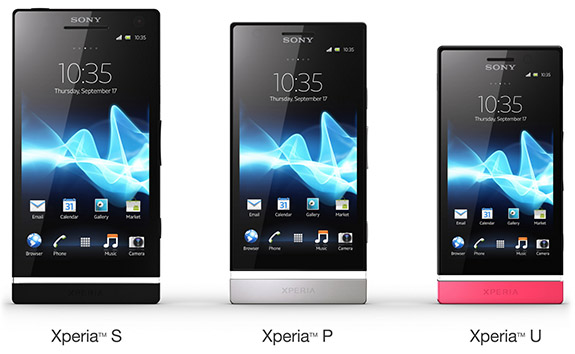 The Xperia S is the higher end unit of the group, with a 1.5 GHz dual core S3 processor, 1GB of RAM, 12 megapixel camera and a 4.3 inch 720p screen. We’ve already reviewed the phone here and found it to be underwhelming, especially because we had great expectations from it. The main problem was the fact that the capacitive buttons were hard to press and hard to get right by intuition only. The display looked nice, the camera was pretty good, but the focusing problems were a bit of a bummer.

The Xperia P is a lower end unit, with a dual core 1 GHz processor, an STE NovaThor component instead of the Snapdragon. The camera is an 8 megapixel unit and the screen measures 4 inches in diagonal, offering a qHD resolution. Taking things down a notch again, the Xperia U offers 512MB of RAM, a 3.5 inch FWVGA display and a 5 megapixel main camera. Prices of these models available unlocked are $560, $480 and $300 respectively. All of them support 3G connectivity on AT&T and T-Mobile.