There’s a landing page for the Samsung Galaxy S3 Developer Edition, courtesy of Samsung itself. This is a Verizon version available in Pebble Blue, with 32GB of storage. Right now the listing shows the model with a “Coming Soon” tag and no price at all. 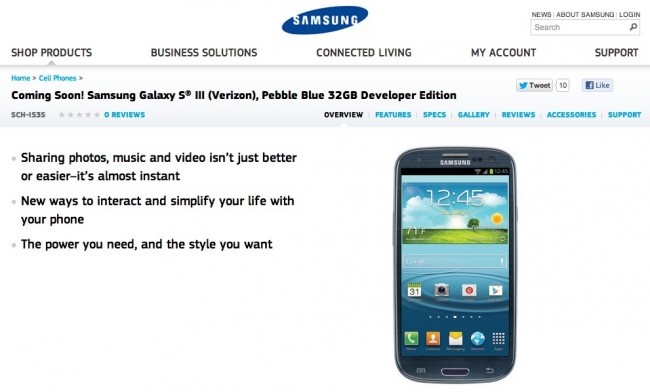 Rumors say that the device might sell for $599 and the Developer Edition is actually a bargain, if you consider that Verizon sells 32GB S3 units for $649. If you want this edition of the smartphone, you will have to get it from Samsung’s store. The version sold by Verizon is subsidized and features a signed bootloader, but there’s word of a software patch to solve that problem. So, if you want an open device with Android and some Verizon affiliation, this is the way to go.

The other specs stay the same, including the quad core Exynos CPU, 8 MP camera, 4.8 inch HD display and 1GB of RAM. I would expecting more special features from a developer edition, to be honest… Just look at the Nokia N900 compared to the N9.