After we saw the Sony C650X Odin leaking on the web as some sort of ubercool flagship phone, now there’s another Sony monster lurking on the interwebs. This one takes no prisoners and offers some mind boggling specs, that seem to include a 6 inch display. 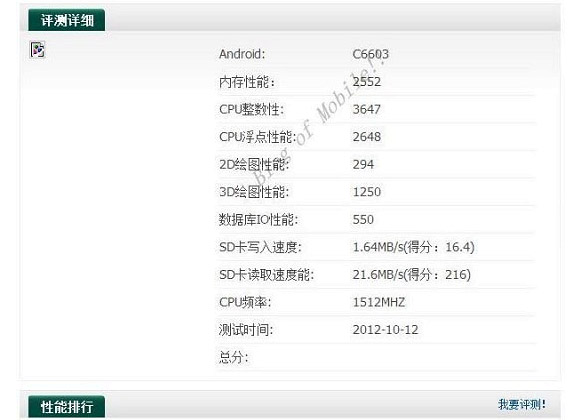 While the Odin had a 5 inch screen with Full HD resolution and a quad core 1.5 GHz Snapdragon S4 Pro CPU, plus 2 GB of RAM, the new 6 incher is more mysterious when it comes to specs. The 6 inch C660X Yuga appeared in the AntuTu benchmarking site and the model number on the site shows 6603, with the last digit representing the region where the handset is sold. Yuga scored 11,321 in AnTuTu, a pretty respectable score. According to the benchmark data, Yuga has a 1.5 GHz CPU and Android 4.1.1 preinstalled.

Xperia Blog seems to be sure that inside there’s a quad core APQ8064 CPU, the same quad core Snapdragon s4 Pro of the Odin. They also confirmed that from their sources, apparently. So, are we ready to deal with 5 and 6 inch smartphones made by Sony now? Should we take them as phablets?