Sony Ericsson Nozomi is one of those upcoming devices that was leaked a bunch of times, but it’s still mysterious. The handset is a dual core device most likely, considering the latest leaks in this field. This time there’s an almost official picture out there, that apparently had some specs included, by the pic was cropped to exclude them. 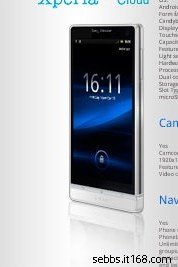 Everyone’s wondering when SE will debut a dual core handset or a Windows Phone device… As far as Nozomi goes, we’ve been hearing theories about the phone since August and now it appears that the phone will be released next year. The image showing the Nozomi is small, but still big enough to figure out what the form factor of the phone will be like.

This seems to be the same device that was spotted in a leak last month. Phone Arena got the pic from IT168, a reliable source when it comes to phones that haven’t yet been launched. In the image there’s a cut out area saying “dual”, most likely referring to the CPU, while the “1920x” section probably refers to the 1080p video capture capability of the camera.

Speculations say that the name Nozomi won’t be kept, being replaced instead with Xperia Arc HD.