Those boys out there on Esato knew what they were talking about when they designed Xperia concept phones bearing the X5 or X10 branding… It turns out that the next Sony Ericsson Xperia handset will be the X2, followed by the X5. Why this order? Find out below. 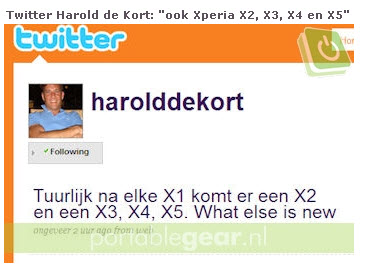 Harold de Kort, Sony Ericsson Marketing Communications Manager for Benelux posted a Twitter message, that you can check out above. In case your Dutch is rusty, here’s the translation: “Of course, after each X1 comes X2, X3, X4 and X5. What else is new.” Sure, this is not much of a confirmation, but it’s still better than nothing, right?

Regarding the X2 followed by the X5 rumour, this is unconfirmed info and there’s even a funny explanation for skipping X4 and X3. Turns out that in Asia, 4 is an unlucky number, while the X3 would mean something vulgar in Russian SMS and Twitter language. Plus, X3 might translate to 13 for some, which is the famous unlucky number we’re all afraid of.