Yes, we know that it’s not funny to laugh at someone’s typo, that will probably get fixed anyway, but it turns out that this concept phone features, among others a “wife”. Of course, it’s the common WiFi feature, with a wrong letter at the end, but it’s still enough to make some of us smile. 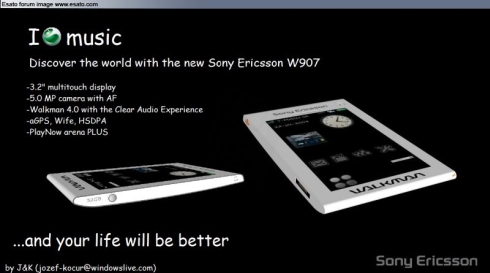 Sony Ericsson W907 is a concept phone created by Esato board user JOJO2531 and it comes with 3.2 inch multitouch display, 32GB of memory, a 5MP autofocus camera and the Walkman 4.0 player. aGPS, WiFi, HSDPA and PlayNow Arena Plus round up the specs of the device.

W907 looks more like a HTC or a Toshiba smartphone, than a Sony Ericsson handset, but I guess that this design trend is fancy enough to be followed, by more than one company.